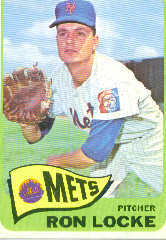 Ron Locke knows he pitched for a Hall of Famer in 1964. However, did he think Mets skipper Casey Stengel was anything like the zany character reporters claimed?

“I thought Casey was a great man. He liked young kids coming up from the minors. he liked talking to young ballplayers to see what they knew about the game.

“But as far as a manager, he thought he had the Yankees. He liked to drink booze and staying up late at night. He really didn’t tell you much about the game.

“He liked talking to sports writers. I think the reporters hit the nail on the head when talking about Casey.”

Art Schult got only the briefest chance to catch on with the 1953 Yankees.

In his “cup of coffee” with manager Casey Stengel, does Schult have a memory of the Hall of Famer?

“RE Stengel – I was never very diplomatic and I really do not want to try at this late date.”

Schult accepted the nickname “Dutch,” although some mystery surrounds the title:

“I believe one of my buddies gave me the nickname ‘Dutch’ when I stole a couple of bases and it stuck for awhile.”

Most incredible is Schult’s recognition of his 1953 Topps card. Some collectors have guessed that Topps painters inserted random backgrounds on some cards. I thought Schult’s card looked like my backyard!

“My contract was brought up to New York at the end of the 1950 season. I was drafted into the Service roughly the same time. The only picture they had was taken in Binghamton, New York, with the center field wall in the background.

I had the pinstripes on but the cap had TC (Triple City logo) and the number on the uniform was #6 which couldn’t be shown. That is why they doctored the card.”

Tomorrow: Remembering my conversation with Hall of Famer Johnny Mize.

Did Bud Harrelson want to play for the San Francisco Giants? I quoted to him from The Ballplayers, a 1990 reference book.

“Harrelson grew up in California wanting to play for the Giants, who rejected him as too small.”

This was repeated in a thorough SABR biography.

I asked for details. Who did the rejecting? How? His reply was fascinating:

“The Giants never scouted me. I always wanted the Mets.”

The Ballplayers did point out one epic week in Harrelson’s career. In the same week in late 1966, he secured Met wins against the Giants and Pirates with dramatic steals of home. The losses dashed pennant hopes for both clubs.

Why don’t we see more steals of home today?

“The old-time pitchers had a longer wind-up.”

Harrelson learned to switch-hit after struggling to hit his weight in 1965.

“Casey Stengel encouraged me. I wanted to play every day, right and left.”

I enjoyed discovering the Ultimate Mets Database entry for Harrelson. Be sure to check out the fan memories section, too. 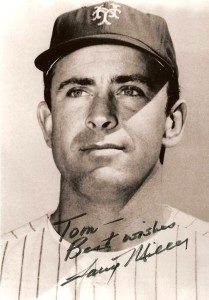