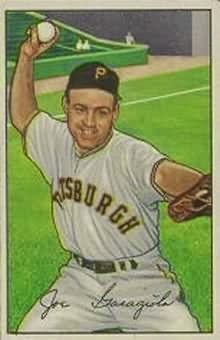 Thanks to Daniel Solzman for this update:

“Joe Garagiola had major surgery in the last few months and is finally starting to return fan mail.  He called yesterday asking about what I sent as he saw the envelope but my photo was either lost or misplaced.”
At age 87, Joe may have fanned some worried thoughts in the hobby, when letters this fall got the “Return to Sender” treatment.
My faith in Joe remains. Back in the 1980s, as co-editor of Sports Collectors Digest, I was surprised that Joe was a reader. He phoned more than once to ask about former players in need. When he started asking for donations by mail, signing autographs to aid the Baseball Assistance Team, I knew how sincere he was about helping fellow players.
Since then, he’s turned his energies to serving children at the St. Peter Mission School.
The Baseball World of Joe Garagiola may not have logged its last chapter, after all! 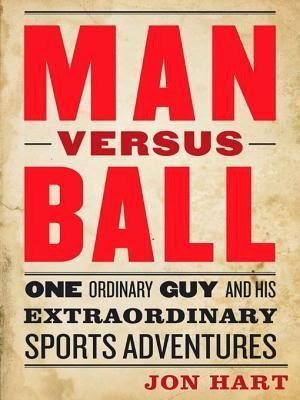 Well, let’s say the spirit of this Paper Tiger does. Plimpton believed in the “you are there” participatory journalism that’s hard to find these days.
That’s why Man Versus Ball: One Ordinary Guy and His Extraordinary Sports Adventures fills a void.
Author Jon Hart shatters a fantasy too many baseball fans might have harbored. Wouldn’t it be sweet to be a ballpark vendor — free games and leftovers?
Hart worked at Yankee Stadium, Shea and CitiField, even the Boston Red Sox spring training.
He didn’t glean lots of baseball tidbits in his service. However, Hart found a vendor during the 1996 World Series who was buddies with the older brother of outfielder Paul O’Neill.
Early on, we find out that vendors have little time for on-field action. Hart observed Jerry Seinfeld outside a suite before several Mets games. That’s it.
The people who choose vending, the drunken fans, the commission-only pay…Hart spells it all out. Willie and Waylon should sing, “Mama, don’t let your babies grow up to be vendors.”
While attending mascot school, the instructor led Hart on with tales of the Mr. Met job becoming open. He wound up with a brief gig at the elementary school, wearing the costume of the Newark Bears independent league baseball team.
My favorite words from Hart came on page 162. From his “annoying things that customers do” list came this warning:
“Someone always asks for ingredients. Who really knows what’s in the pretzels–or the dogs, for that matter. Here are the ingredients, in short: IT’S CRAP!”
Hart chose a tough road to travel with this title. Fans of just one sport will be peeved that he writes about the other sports. Worst of all, he isn’t a celebrity name-dropper. Instead, he’s telling the stories of the unknown sports lovers, those people who’ll take any job to be near professional competition.
Based on Hart’s showing here, I’d be first in line for his next baseball-only memoir. 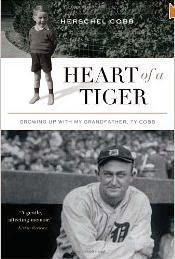 Here’s news you can use!

“Spitball Magazine is pleased to announce that the winner of the 2013 CASEY Award for Best Baseball Book of the Year is: Heart of a Tiger: Growing Up with My Grandfather, Ty Cobb by Herschel Cobb and ECW Press.

Mr. Cobb will be presented with his CASEY Award, a specially-made blue & gold Louisville Slugger, at the 31st Annual CASEY Awards Banquet from 2-4 p.m. at Crosley’s Sports Bar & Eatery, located at 4910 Vine Street, St. Bernard, OH (a suburb of Cincinnati).

Editor Mike Shannon added:
“The book is also still in the first edition, which is important in the book collecting world and the future re-sell value of a signed copy. Also, … and this is very cool … Mr. Cobb told me today that he will be signing in GREEN INK … just as his famous grandfather did!
I will ask him to inscribe all books with a special “CASEY Awards Banquet, Cincinnati, Ohio, March 9, 2014” inscription, in addition to whatever else you ask him to inscribe, such as “To Billy, a great fastball hitter at UK.”

I hope you will be present at the Banquet, but even if you can’t make it (and I know some of you live too far away to come), I can get a book signed for you and mail it to you afterwards. So … please let me know if you want me to include you … and how many copies … in my order to the publisher.

Cost will the cover price, $25. Plus $3 if I have to mail your copy. Spitball will make a few bucks on each copy we sell, but I hope you don’t mind that. Good cause and all that.

And please, forward this email to anybody I left out whom you know will be interested in coming to the Banquet or ordering a signed copy of the book. 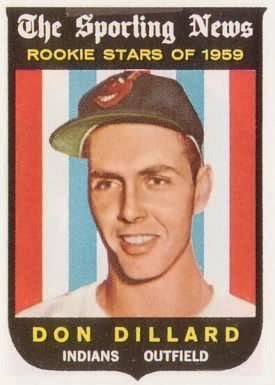 More than one collector has solved the riddle of Don Dillard, who played for the Indians and Braves from 1959 to 1965.

For several years, collectors received rubber-stamped “autographs” in reply. However, those asking questions about his career have been getting his actual shaky signature, too.
Recently, a family member has been helping with correspondence, adding the explanation that Mr. Dillard had a stroke in 2010.
Don’t assume that the rubber-stamped facsimile response is done in spite by an angry retiree. In their eyes, a non-response would be worse than their signature equivalent.
A suggestion? Try adding, in your own words, a request to the tune of:
“These are the only cards I have of you, cards from my personal collection. If you are unable to autograph these yourself for any reason, I will be grateful to have them returned blank, happy that you read my letter.”

How did I miss this one?

Author Steve Rushin has unearthed untold diamond history in The 34-Ton Bat: the Story of Baseball, As Told Through Bobble Heads, Cracker Jacks, Jock Straps, Eye Black & 375 Other Strange & Unforgettable Objects (Little & Brown, $25).
This is a “Me, too!” book, answering questions we’ve all had about baseball’s beginnings. He’s captured classic stories about the PEOPLE behind these baseball traditions.
Here’s one that stands out.
Years ago, I landed an assignment to write about history of Dodgers souvenirs for the team yearbook (you can look it up!). A huge part of that story was the late Danny Goodman, the merchandising wizard who showed the world all the logoed goodies Los Angeles Dodgers fans could enjoy. In the early 1970s, I’d save my allowance to mail-order team memorabilia that was 10-15 years old, at bargain prices. Little did I know that the man sending out the price list helped invent these collectibles!
I spoke to a high-ranking team employee, someone who’d been in the Dodgers family since the L.A. transplant.
“Why do you want to know about him? He died years ago,” I was informed.
Therefore, I know Rushin’s task wasn’t easy. Writing about baseball’s unsung heroes is one huge challenge.
Here’s something autograph collectors should consider. Many of these history makers are still alive, and would be easy to track down. Write to them. Do they know they’re getting recognition, at last? Tell them you read about them. They may not be baseball cards of them, but that doesn’t lessen their claims to fame.
Spring training isn’t here yet. If you need a book to get you through the last days of baseball-less winter, Steve Rushin is your author.