I’m pleased with any new baseball movie. With this one, I hoped, “Will this push Topps to honor at least one scout in a future retro card set?”

When will card shows wake up? Tom Greenwade died 25 years ago. People were shelling out for Mickey Mantle autographs. Does anyone have a signed baseball from the man who discovered The Mick? I would have attended.

Sure, some former players became scouts. However, their autograph gets collected anyway, just for appearing in a card set.

Is there a whole legion of baseball scout autograph collectors that I don’t know about?

Thanks to Harvey Meiselman. Here’s yet more proof that his 2013 Baseball Address List provides exceptional value throughout the year.

He notified all of list purchasers through e-mail update that Ty Cline has stopped signing through the mail, sending this message as the sole reply:

“Ty Cline regrettably is no longer signing memorabilia through the mail”

This news is especially worrysome. The www.sportscollectors.net website reported that, through October, Cline had signed 151 of 156 requests.

When a generous signer stops suddenly, one of three red-flagpossibilities appear:

1. He’s quite ill. (Cline is 73.)
2. Someone has perpetuated the myth that the signer’s free autographs are being black-marketed on the Internet, with untold riches escaping the former player’s family.
3. The fan mail screening service wants a cut of the action, offering to split profits from future TTM signing for a fee.

Cline (or family) have been sending out notices. They could have been trashing mail, instead. I hope to find out if they’ll start “Return to Sender” refusing mail, so collectors won’t lose their cards.

I’m grateful to Harvey for the update, and to a player who gave generously of his time and signature for so many years. 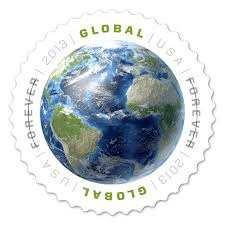 Actually, it’s one of the best parts of the upcoming postal increase Monday.

For the first time,  air mail will have some simplicity. It’s $1.10 per ROUND stamp. One of these beauties will get you up to a 2-ounce letter-sized mailing to Canada. You’ll still need Canadian postage on your SASE back to the USA, however.

For the collectors outside the United States, there won’t be the worry of not getting a response before the next postal increase. Buy it now (or when it’s on sale Monday) and get the benefits FOREVER. Hence, the name.

My only wish? The stamp is round. Make one that looks like a baseball!

What years did you get your Pete Rose autograph by mail?

Do you know who really signed it?

I wasn’t dreaming when I mentioned last week that I seemed to recall a book from the 1980s detailed how Rose delegated his fan mail duties to an assistant.

“Dear Pete” by Helen Fabbri (the secretary) & Larry Names; published by the Laranmark Press in 1985.
This confirmation comes from noted baseball book dealer Bobby Plapinger:
“HERE’s my “catalog blurb” about it: Pete Rose’s story as told (mostly) through his fan mail w. connecting narrative supplied by Ms. Fabbri, his “personal fan mail secretary” for over 9 years. Fwd. by Rose who says he likes letters from kids because “their innocence and faith in me makes all the hard work worthwhile”. He, of course, would go on to reward his young fans’ “innocence & faith” in him for the rest of his career in and out of the game. BW photos.”

Even the book held a hidden story. Could it be that the likely ghost-signer of Rose autographs used a ghostwriter for author?

“Actually, I wrote the book for her. All she did was pick out the fan letters, and i let her have credit as author. Yes, she did sign Pete’s fan mail for him. So anybody who has a response from Pete in those years she was his fanmail secretary might have a forgery. I had Pete’s autograph on something. He signed something for me when we had breakfast together down in Tampa on the last Sunday of spring training 1985. He even picked up the check. Personally, I like Pete and think he’s getting a raw deal from MLB. But that’s another story. – Larry Names”

How’s this for some juicy subplot for the Rose TLC show?