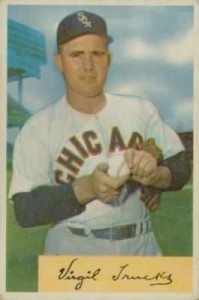 I wanted to salute a World War II veteran and a truly memorable person — Virgil Trucks.

Drop by tomorrow (Tuesday) for a conversation about autographs. Fans have been seeking his signature for 60 years now. Find out why he remains a hero of the hobby. Want to reward Mr. Trucks for his autograph? He tells how. 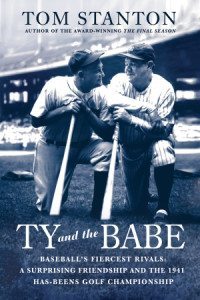 Here’s a quick tip for the holiday weekend:

Baseball is a sport. Players are sportsmen. Some might define the term as “doing stuff outdoors.”

Golf has strange ties to baseball. It’s the top activity for someone’s off day. Charity tournaments. Every former player I’ve tried to call (even the 80-somethings!) are often “out on the course.”

The Tom Stanton book is a fun read. How could golf appeal to a superstar baseball player? The clues are all in Stanton’s fine dual biography.

Sadly, some former players might have considered baseball their job. Golf was their PASSION.

Make a connection in your letter. Golf might be a perfect opportunity.

As first reported on the http://www.sportscollectors.net/ forum back in March, former Yankee Jim Coates replied to a collector who sent $5 for an autograph that he had received a letter from the Major League Baseball Players Alumni Association.

According to the note from Coates, the MLBPAA was discouraging members from signing random fan mail, because autographs were being re-sold on the internet.

Some collectors speculated that the MLBPAA might try this to hype interest for private signings.

I’m going to write to Coates, not for an autograph, but in hopes of acquiring a copy of the letter. I’ve e-mailed the MLBPAA. A staff member replied, “Are you sure it was us?”

No, I’m not sure. If anyone gets a copy of this actual letter, I’d like to know just what it says. What group is the warning from? Who signed the letter? If I learn more, I’ll offer the actual accuser a chance to detail the supposed evil in our hobby.