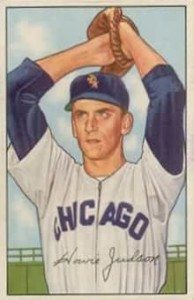 “A courageous man, Judson pitched his final seasons knowing he might be going blind from a retina infection.”

Imagine thinking that every game might be your last. Consider that the other team knows you may be distracted, far from your best physical or emotional self.

Howie Judson pitched with such a burden. The famed reference book noted that he was a “highly respected hurler,” even though he never had a winning season. Others might say that his will to compete gave him a winning career, no matter what the stats claim.

“I kept it quiet for a number of years, but finally it got out, so it got in the papers.”

Although his debut came more than 60 years ago, Judson recalled the anticipation of that first game with the 1948 White Sox:

“I was told about five days early. I could hardly wait for the time to pass.”

How did it go? Let the stunning http://www.retrosheet.org/ share Judson’s premiere game details!

Judson saluted one batterymate during his career:

“The best catcher I ever pitched to was Hobie Landrith with the Reds. He was very shifty behind the plate and had a good arm.”

Years ago at a Tacoma PCL game, pitching coach Chuck Estrada growled this question to a group of adult collectors.

A couple just giggled. I just pulled back. One squeaked, “Collect it?”

One eyebrow arched. Estrada smirked. He stomped past.

Writing or in person, the WHY needs to be there in your “pitch” for an autograph. If you can’t say why you want that precise person, save your energy and stamps.

“The Stadium was cool. But my memories of the players that I had read about are/were more clear.”

In the first-year replies I’ve shared in “Baseball By The Letters,” I’ve loved player memories about the ballparks I never visited.

However, I’m beginning to understand the many half-answers I receive.

J.W. Porter remembered how close the fans in Tiger Stadium were. Pitcher Al Grunwald (who passed away in January) said he felt like he could reach out and touch the Green Monster from the pitcher’s mound.

Those are exceptions. So often, most players are like Bouldin. They’re so happy to be a major leaguer that the “where” of their career is almost a riddle. Stat-oriented players sometimes stop at quoting outfield dimensions to me. Of course, if you’re a pitcher afraid of gopher balls or a pinch-hitter hoping to tie a game, you may be fixated on how far that right field wall is (or isn’t).

I won’t give up yet. The list of people still here to tell you about playing in Ebbets Field, the Polo Grounds or Crosley Field dwindles yearly. I realize that each question is like swinging for the fences in the bottom of the ninth. We’re supposed to take time to smell the roses along the way, says the song. I think too many players were so busy trying to keep their jobs. They never realized that their place of employment would become a baseball shrine that future generations could only dream about.

Today’s news comes courtesy of Kyle Smego, the senior voice behind the fine father and son website and blog known as “The Autograph Addict.” In 2010, I discovered their epic quest to complete a 1962 Topps set autographed.

“I wrote to former Cubs outfielder Bob Will, back in December. I received a handwritten note back that he asks for a $10 donation to a children’s leukemia hospital. In return, he would send an signed photo and answer any questions that I had. It was a nice note….not the standard price list that some send. So I decided to send a $20 donation.

A couple of weeks later, I received a five page response from Mr. Will. He spoke about his playing days, Freddie Lindstrom (who was his manager in college), and what he’s doing today. It turns out that he still hangs out with Billy Williams, Rich Nye, Billy Pierce, and other former Chicago athletes. Can you imagine what goes on when those guys get together?

At the end of the letter he said that he is in the process of writing a book about his time in baseball, but….he is currently battling 4th stage colon cancer that has spread to his blood system. lungs, and liver.

I’m not sure if you ever send “donations”, but I think this is one case where you should consider it. It’s for a good cause and you’ll get a great story in return.

You can read my letter here:

Kyle’s news is quite moving. As Will battles cancer, his ability to do more than sign autographs may be limited. Likewise, his hope to tell his baseball life story in book form is a beat-the-clock challenge.

Too many moments in baseball history are being lost to the ravages of time. Every letter Will has sent helps preserve just one more seed of a story. For the hobby, Will hasn’t made “what about me?” demands for his autograph. He’s donating the “fee” to children in need, while trying to give added value to every collector who participates.

As Bob Will battles for his future, tell him that he mattered. Let him know he’s not forgotten. Send him a simple note. Give him YOUR autograph.

Here’s a quick tip for anyone wanting to correspond with former players:

Realize that there’s more than one way to judge a career highlight.

I thought Carl Bouldin would have some nice memories about Sept., 15, 1962, when he twirled a 7-hit win at home versus the White Sox. (Thank you, http://www.retrosheet.org/.) However, I never said “your best game ever seems like…” Instead, I asked about the day, then followed up with:

If this wasn’t your best game ever, please describe what was?

“Getting a complete game was big for me, or anyone, I think. I felt like I belonged and knew I could pitch in the ‘bigs.’

My best game was probably in winter ball in Caracas, Venezuela. In a big city rivalry, I pitched against a team with the three Alou Brothers and won, 3-1. Pete Rose was on my team and after that game the fans carried me around on their shoulders.

Tomorrow: The Autograph Addict hits the jackpot with Cub Bob Will.