From the classic D on the uniform to the voice of Ernie Harwell, the Detroit Tigers have been a tradition-rich team. Preserving those traditions is super-fan Bobby Hoeft.

Hoeft publishes a labor of love four times yearly, the “Detroit Tigers Quarterly.” The newsletter is rich with classic tales. Past issues have sparkled with contributions from J.W. Porter, Virgil Trucks and the golden-throated Harwell.

Hoeft’s baseball past is the stuff movies are made of. A former Tigers minor leaguer who grew up in Detroit, it’s easy to see how his love for the team remains. His book When Baseball Was Fun belongs on every Tiger fan bookshelf. To subscribe to the newsletter or buy an AUTOGRAPHED copy of the book by mail, check out Bobby’s website. Meanwhile, enjoy the memories Bobby was kind enough to share in this e-mail interview:

Q: What was the first Tiger game you attended like?

A: I came up the same entrance ramp that Charley Gehringer did down in the rf corner or also called the MICHIGAN/TRUMBULL  ramp.  Also, just like the Quiet Man I came in straight from a farm.  Him from Fowlerville, me from Rogers City.  AWESOME is still how I feel to this day  whenever I think about it.  My Dad had purchased tickets for a weekend series against those damned Yankees.  They were also awesome,  but nothing like BRIGGS STADIUM.  The beauty of how the colors of green and gray just seemed to meld together.  The blue sky with it’s white fluffy clouds added to this extravaganza…AND THEN THE PLAYERS!  There they were trotting around in their proud English “D” uniforms.   OOOOPPS, there goes another goose bump!

Q: Did you meet any Tigers growing up?  Memories?

After moving down from the farm to the lower east side of Detroit I became a center fielder for as many teams as I could squeeze into a 24 hour day.  That’s why in 1947 it was natural for me to be found on Belle Isle with another thousand Detroit amateur players trying out for the HEARST ALL AMERICAN BASEBALL TEAM.  The first step was to make the cut on the Island.  The next step was to make the cut the following week at Northwestern field.  Not only did I make the cut at NW I managed to hit a ball out over GRAND RIVER!  The last step was to play on the City All-Star team against a Michigan All-Star team at BRIGGS STADIUM. I had a field day, stealing three bases, including home, getting three hits and making a solid “country catch” in center field.

That night I shook hands with Charles Leonard Gehringer! What a thrill!

He was the manager of the out-state team and was given the honor of calling up the two winners. The place was slightly jammed.  For the Out-state team  read off “JIM ENGLEMAN  from Pontiac, Michigan, and the place went starkers.  Jimmy went  up to the speaker’s table to accept the honor.  After the crowd settled down the great CHARLEY GEHRINGER cleared his throat and said:  ‘And representing DETROIT will be that home plate stealer,  BOBBY HOEFT, from SOUTHEASTERN HIGH SCHOOL.’

I can still hear my Dad’s whistle.  I can still feel Charley’s handshake.  And I can see my Mom crying.  The place was the Book Cadillac hotel where THE QUIET MAN and I met several times and where this East Side kid would cherish every word that this man directed  my way.”

(Thanks to Kohei Nirengi for alerting me to Bobby’s amazing story!) 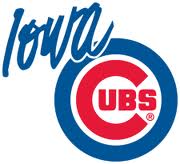 Even the day after Christmas, I’m still in a festive spirit.

That “No Place Like Home for the Holidays” song sold me. I’m sticking close to home, writing to the men I’ve encountered as an Iowa Cubs fan.

Each sparkled for at least one day in Des Moines, often while I was in attendance. Those who’ll get my last letters of 2011 include:

Coming Tuesday: Do you know “When Baseball Was Fun”? Bobby Hoeft, possibly the greatest Detroit Tigers fan ever, still does!