Menu
Last week, I wrote about seeing Dodgers pitching coach Rick Honeycutt appear in the “funny papers.”
I pondered whether cartoonists were well-connected folk who knew anyone and everyone. Would it matter saying to a major leaguer that you saw them honored in the comics?
Here’s the kind reply from creator Scott Hilburn himself:
“Hi Tom,
I’m not specifically a Dodgers fan – but a huge baseball fan in general.
I’ve never been to a Dodgers game (I live in Dallas) but only because I haven’t had the opportunity yet.

I try to catch the closest ballgame when I travel and I hope to, one day, visit every stadium.
I’ve included a few players in my comic before. Shane Victorino immediately comes to mind.
No feedback from any of the players though.”

Thanks to Scott for his time, and for funny stuff worth sharing with any real-life counterpart.

Many new collectors ask the best way to write a letter to a former major leaguer.

The late Virgil Trucks told me once that fan mail writers tried to tell him things about his career. Rarely could someone surprise him with a factoid or stats.
I’m talking about SHOWING someone when you write.
How many people saw this 6/23 comic panel. It’s called Argyle Sweater, by Scott Hilburn. Funny stuff. Rarely does a cartoonist reference a specific person.
In case you can’t read the pitching coach’s number, Hilburn even has Honeycutt’s correct #40. Any Los Angeles Dodgers fan would love seeing broadcaster Vin Scully co-starring in the gag.
Cut out the comic (or print it out). Say you thought his family might like an extra. Send one to the coach.
Players and retirees think that collectors are all about taking. Give a little.

Cincinnati’s Brandon Phillips can play, on field and off.

If baseball had an All-Twitter team, he’d be a captain.
Posing for fan photos. Sharing those photos. He does it all.
Almost all.
The always-amazing website www.sportscollectors.net provided two stunning stats on Phillips. He’s still at a 70 percent success rate for fan mail. However, members on the website haven’t recorded a TTM success from him since October, 2011.
Everyone’s grooving on the story about Phillips responding with kindness to a drunken Pirates fan last week, providing a humorous but pointed “personalized” autograph.
Will BP apply half the effort on his fan mail that he showed toward a soused heckler? Many sober collectors are waiting. And waiting. And waiting… 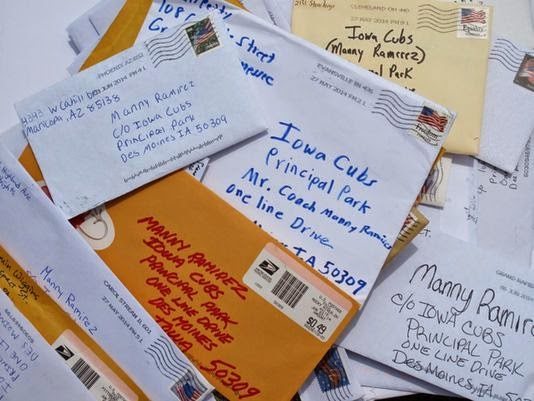 I spotted this surprise in the Sunday Des Moines Register newspaper.

Someone still wants an autograph from the controversial one-time slugger.
Most of all, I was glad to see that the Iowa Cubs take fan mail seriously. In fact, the “special to the Register” photo credit hints that someone from the I-Cub front office might have provided the picture to the newspaper. I thought an impatient clubhouse man anxious to tidy up could RTS envelopes, simply because ManRam is not there (yet? still???) to claim the mail.
By the way, none of the envelopes are mine. How about you?