He signed autographs like he played: wild, unpredictable, all out.

According to www.sportscollectors.net, Freel responded to just 30 of 106 recorded TTM contacts, the last being in April, 2009.

See you in January. 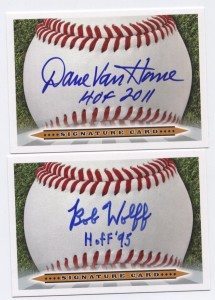 Brian Flam (www.theautographcard.com) brings new hope to the TTM hobby. He pointed out one attractive subset of baseball history that many autograph buffs have overlooked: the Ford Frick winners, as honored by the Baseball Hall of Fame.

Although many early pioneers have died, Brian noted that he’s had good success through the years writing to broadcasters in care of their teams.

I agree. I treasure the bonus photo I received years ago from Jack Buck. He added “HOF 1987” and “Go Crazy Folks.”

Who’ll be the next names on the list? Get them early. 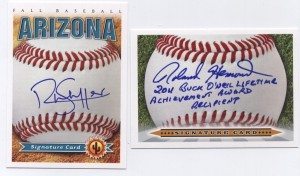 The Hall of Fame has another mess to clean up.

Inducting someone after their death has happened before.

Miller may have peeved as many collectors as owners in his lifetime. His final stats on www.sportscollectors.net say that he responded 126 times to 174 recorded TTM attempts.

I found the non-player in just two card sets: a 1994 Upper Deck issue and the 2005 Topps All-Time Fan Favorites set.

Miller’s eyesight may have been failing for years, judging by his microscopic signatures.

In his defense, neither card offered a great space for an autograph.

I think he became irritated with the cumbersome nature of signing his book and baseballs. I believe that the final collectors who succeeded with Miller were ones who proved they were sincere, educated fans.

Look hard for other baseball pioneers. Find them before Cooperstown, or the Grim Reaper, calls.

Readers: are other non-players Hall of Fame material, ready for autograph collections?

I ask myself this every day. Not just about the hobby, but about all walks of life. We know the problems. How can we celebrate what’s good in the interim?

I began my survey with Rich Hanson, one of the most ambitious autograph collectors I’ve ever known.

About the only thing good about baseball card autograph collecting is the accessability of the players at the minor league level. In-person autographing is still fun. By mail is getting tougher, and the EBayers who sell signatures have lent a foul stench to the hobby. But I’m sure you’ve heard my complaints on that score already.

Readers, how would you answer?