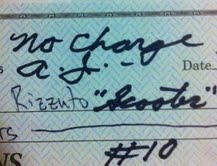 For starters, I received three consolation prizes in my mailbox in the last week. Two pitchers and an outfielder were good for autographs only, not acknowledging questions I included.

Bob Sykes signed my letter, then included an autographed printout of his favorite Bible verse (Phil. 4:13).

Brewer and Astro outfielder Wilbur Howard penned his flamboyant signature on my letter.

Each answered. That’s promising. I’m not suggesting the trio would never answer any questions. The only thing I learned is that I asked the wrong questions at the wrong time.

Thanks to all of you who sent positive feedback about my conversation with 1953 Yankee Steve Kraly.

Collector Andrew Scott sent scans of what he created for Kraly. Impressive! Check them out:

As more current and former players fear blank index cards, customs are a great alternative. Make your own collectible. Or, make friends with artistic hobbyists like Andrew.

Lastly, there’s hope for Cubs fans who haven’t gotten their copies of Ron Santo: A Perfect 10 yet. Did you miss my review? Here it is from June 17.

The nearest Iowa Walgreens store had copies on the counter, discounted from $24.95 to $14.95. I’ve heard that Jewel Foods has been carrying them at a sale price, too. It’s a book worth owning — and sharing!

Calling all Yankees and Mets fans…

I just received a response from Steve Kraly, pitcher for the 1953 Yankees. I sent him three questions. He wrote back without answers. Instead, he gave me permission to call to chat about any questions I’d have.

Kraly is so much more than a “cup of coffee” guy with the Yankees. Check out this great feature from 2008.

I didn’t know Kraly was a beloved part of Binghamton Mets history. Besides, I’ve never talked to the inspiration for a bobblehead, before.
Kraly was generous. I wanted to share, too. Through Monday, I’ll be compiling other questions YOU might like answered. I’ll include those in my conversation.

Coming Thursday: Comparing Virgil Trucks to a Hall of Famer.