When I saw the headline of the newest-named storm, I wrote to Carolyn Beckwith, the daughter of fabled pitcher Virgil Trucks. They both share a fine sense of humor. I knew that the pair would love the headlines of “Virgil” conquering America.

I was too late. “Fire” passed away Saturday at age 95.

According to the Detroit News tribute, this hobby hero wanted to sign autographs during his final days in the hospital. In his final months, he hadn’t been well enough to handle fan mail.

However, this baseball ambassador was legendary for his above-and-beyond replies to fan mail throughout his life. He shared his autograph philosophy in this 2011 blog feature.

Virgil’s funeral comes Thursday. The World War II veteran will be buried in a military cemetery.

As I spoke to Carolyn , I thanked her. Virgil’s family supported his eternal dedication to fan mail. In our last conversation, I asked him why he was so kind and thorough answering autograph requests of people who may not have even been alive during his career.

“We all love baseball,” he replied.

I’ll never forget Virgil Trucks. Amazingly, I don’t think he ever forgot any of us.

Like Loading...
He served the U.S. Army in World War II.
He threw two no-hitters.
He honored fans and collectors with untold autographs for more than a half-century.
Virgil Trucks is a hero on so many fronts. That’s why this last curtain call must be so hard.
The fabled hurler suffered a broken leg this year. Sadly, his time away from signing is becoming permanent. The update is from daughter Carolyn Beckwith:
“I had a long visit with Dad on Monday. He was sleeping in his recliner when I got there. He looked good and said he felt pretty good. We talked about fan mail and autographs. He has carpel tunnel in both hands and his fingers don’t have feeling in them. He has been dealing with this for quite some time. It has gotten to the point now it is hard for him to hold a pen in his hand. His autograph is not good and he feels it is time for him to end what has brought him a tremendous amount of joy, hearing from his fans.
His greatest wish has always been to be inducted into Cooperstown. He asked me to tell you, if the fans want to send a letter to Bud Selig, he would appreciate that so much.
Thank you Tom and please thank all of the fans for the cards and concern for my Dad.
Sincerely,
Carolyn”
Please, no more autograph requests to his Alabama home. The family has been RTS-ing mail since the injury. For those of us who received signatures, letters and encouragement from Mr. Trucks, we are grateful.

It was good to hear from L.A. Angels pitcher Ken McBride and 1950s outfielder Tom Wright in just a week.

However, neither addressed any questions.

Wright has a postcard-sized photo of him in a Red Sox uniform with his complete stats (major AND minor) on back. Anyone writing for an autograph should request a photo. Say that you’d like to know more about his minor league days. Wright added a return address label on the SASE. He did pen a sparkling signature.

I did ask about his THREE missing seasons (1943-45), sacrificed on behalf of World War II. Time is running out to fill in the gaps for this epic era.

McBride autographed the letter I sent. At first, I was concerned his autograph was shaky. With a little investigation on http://www.sportscollectors.net/, I saw related scans of signatures dating back to 2006. He’s taken to an abbreviated autograph used by today’s players. Speed signing! Sloppy, more than shaky.

Want a card signed fast? These two are your men. They seem sworn to same-day replies. Hoping for a personalization or something specific, even a question about their career? Don’t bet on it.

Coming Friday: an update from Frank “The Original One” Thomas 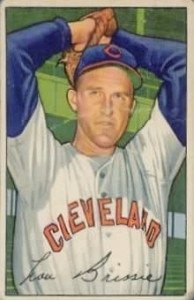 To get through the long winter, I seek out baseball movies and documentaries. Here’s one that needs to be made: The Lou Brissie Story.

Everyone knows (or should know) the story of Lou Brissie, the World War II veteran who won the Purple Heart. He won my heart by continuing his dream of major league baseball, even after a wartime attack shattered one leg in 30 places. he became a 1949 All-Star, winning 16 games.

A great place to learn more is the fine SABR biography by acclaimed researcher Bill Nowlin. Then, check out the book The Corporal Was a Pitcher: The Courage of Lou Brissie.

I asked about a triple Brissie hit. (Nice work, http://www.retrosheet.org/.) Imagine legging out a triple with just one good leg. He replied:

“I do not recall the triple. I think the ball took an odd bounce off the wall. I’m just not sure.”

Brissie’s book details his friendship with infielder Hank Majeski. They stayed in touch for years after retirement, until Majeski’s death. Brissie’s tribute:

“Hank, a great player, came through in tough situations, Quiet but 100 percent all the time. A great person and friend.”

Can Brissie imagine a player today, someone who reflects the determination of his teammates like Majeski, someone he could even have served with?

“The one player I can think of plays shortstop for the Yankees, Derek Jeter.”

I was moved by this 2007 ESPN profile of Brissie’s devotion to soldiers wounded in Iraq and Afghanistan. Also, in Nowlin’s SABR biography, he reveals how Brissie nixed a movie during his career. 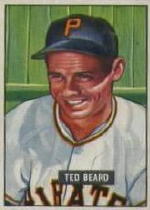 Ted Beard is a real player and real hero.

Beard delayed his career serving as an Army medic in World War II. He faced a four-year exile in the minors before earning a comeback with the Chicago White Sox. He owns more than a dozen years of AAA experience. Others may have bigger numbers in the bigs. However, no one should doubt Beard’s determination or love for the game.

We may never know Beard’s whole story. My letter was returned with a note:

“Ted is 89 and does not remember specifics of his playing career. We are sorry that we can’t fill your request.

Beard is still signing autographs. On http://www.sportscollectors.net/, I see he’s 51-for-51. Even if he doesn’t remember his stats, Beard hasn’t forgotten why people collect.

Look at Beard’s career highlights on the ever-amazing http://www.retrosheet.org/. Beard debuted in a 1948 doubleheader, posting a triple in both games! Yes, Mrs. Beard, there are many specifics fans will remember about your husband. You’re both winners on my scorecard.