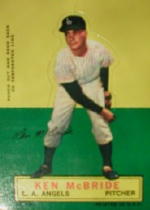 It was good to hear from L.A. Angels pitcher Ken McBride and 1950s outfielder Tom Wright in just a week.

However, neither addressed any questions.

Wright has a postcard-sized photo of him in a Red Sox uniform with his complete stats (major AND minor) on back. Anyone writing for an autograph should request a photo. Say that you’d like to know more about his minor league days. Wright added a return address label on the SASE. He did pen a sparkling signature.

I did ask about his THREE missing seasons (1943-45), sacrificed on behalf of World War II. Time is running out to fill in the gaps for this epic era.

McBride autographed the letter I sent. At first, I was concerned his autograph was shaky. With a little investigation on http://www.sportscollectors.net/, I saw related scans of signatures dating back to 2006. He’s taken to an abbreviated autograph used by today’s players. Speed signing! Sloppy, more than shaky.

Want a card signed fast? These two are your men. They seem sworn to same-day replies. Hoping for a personalization or something specific, even a question about their career? Don’t bet on it.

Coming Friday: an update from Frank “The Original One” Thomas