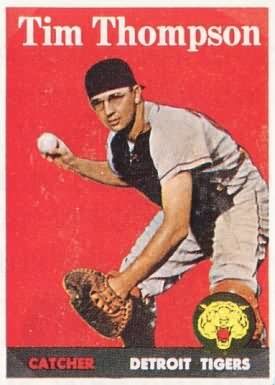 You know that guy, uh, what’s his name?

Don’t expect any help from a certain 1950s catcher by the full name of Charles Lemoine Thompson. The always-impressive Baseball Almanac website shows his autographed 1954 Topps card, signed “Charlie,” as indicated on the card. They file the catcher under “Tim Thompson,” his nickname.

I blame Topps for scattering the catcher throughout history. I asked if the card company mixed up his name.

That’s all Mr. Thompson had to say.

Imagine all the 1950s kids lining up their differently-named cards. Compounding the confusion, starting in 1957, Topps shows the catcher wearing glasses. Shades of Clint Courtney! I asked if this was difficult or dangerous back then.

The website Baseball Reference notes Thompson’s success as a scout for decades after his career ended. I asked if he had a couple of signings or discoveries he was proudest of.

Oh. About his proper, or even preferred first name?