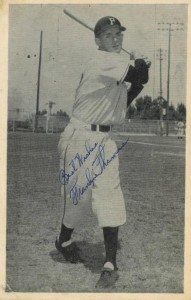 Talking with Frank “The Original One, 1951-66” Thomas, I marveled at his passion as a fan and collector. Look at his website to see all the sets he appeared in.

I first wrote about Frank May 6, telling about the causes he supports through autograph signing. The two charities supporting young cancer patients are in Charleston, South Carolina, he spotted. E on the blogger, says the official scorer.

Frank’s biggest revelation escaped me in the original post. He mentioned the messy or abbreviated signatures of stars like Frank “Big Hurt” Thomas.

“I don’t know what it is with some guys and their autographs,” he speculated. “Are they afraid of identity theft or something?”

I loved this answer. This big-hearted Pirates star can’t fathom scribbling for collectors. Do players want to conceal and disguise their signed identities? I could hear in his voice that he believes hobbyists deserve signatures showing every letter, first and last name. A fear of crime was the only possible explanation Frank the First could muster to explain half-hearted autographs.