Talk about hobby hope! The 2019 Baseball Address List will help ring in my new year.

His letter to past address list buyers got me psyched for the long winter. As usual, Harvey’s adding features and updates to his 2019 edition. For instance, this volume will have a list of more than 250 baseball names who are now charging for TTM autographs.

“Yes, over 250 players are now charging,” Harvey said.  “Some are donating the money to charity, but most are keeping the money themselves. They see the value of baseball autographs on eBay and places like that and want to get in on the action and make some money on their signatures. No big surprise with what PastPros is doing with a lot of the lesser-known MLB players. Charging ridiculous fees (they make almost as much on a handling charge as the players make on a signature) and all requests have to go through their company in Canada so it takes a long time. I hear a lot of complaints from my customers about them.”

How can Harvey often update addresses of moved players so quickly? He has address-hunting experience that runs far beyond his days in the hobby. “My search engine costs me $400 a month and is updated every week,” he said.” It was the same search engine I used when I was a skip tracer at a Florida bank. That’s why my lists are so good.”

To learn more about Harvey’s address lists (baseball is just one of many sports he covers), go to www.SportsAddressLists.com. 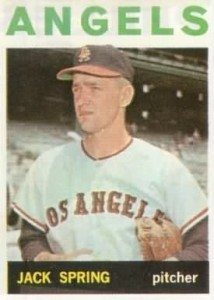 Jack Spring is still in the game.

Thanks to collector Steve Smith of Fall River, Nova Scotia. He posted on the ever-handy www.sportscollectors.net that he had received two autographed cards from Jack Spring. Additionally, Mr. Spring provided a note saying why he couldn’t answer questions by mail.

It’s hard not to be a cynical collector these days. Upon seeing the posting by Steve, I thought of many reasons why Jack Spring was impatient with collectors.

Through sportscollectors.net, subscribers can send personal messages to collectors who’ve posted a success or failure. That meant I could find out the truth.

Nevertheless, the former pitcher isn’t letting autograph requests go unanswered completely. Even a signature may be getting difficult. That’s not stopping the stopper.

(One of Spring’s untold stories must surround June, 1964. Today’s sportswriters goof in claiming that the Cubs and Cardinals staged the swap of pitcher Ernie Broglio for Lou Brock. In a 6-player deal, the Cubs sent Spring and fellow moundsman Paul Toth to round out the deal.)

The moral? Appreciate every autograph. Treasure every extra. Some signers are taking extra efforts to give back to the game and its fans. 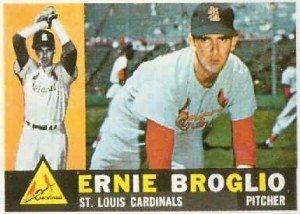