Players get box scores. Why not fans, too?

Scorecards. Scorebook magazines. How do you keep track of all the memories of the games you’ve attended?
Peter Robert Casey has a winning game plan in Hardball Passport. He’s developed web applications for baseball and basketball fans to track their game-going adventures.
Peter has one cool past as a sports fan. Peter held community management and strategy roles with Team Epiphany [on the Nike Basketball account], Five-Star Basketball, and the New York Knicks, and spent five years on the brick-and-mortar side of community building at Columbia University’s Teachers College.
In 2009, he became the first media-credentialed microblogger in college basketball history when I received a press pass to cover St. John’s University men’s basketball team exclusively via my personal Twitter account.
I asked him for more details on the inspiration that’s driven him to create such insightful, fun apps. He replied:
“Below are the answers to your great Qs and attached is a copy of a photo of me at the United Center. This past fall, I saw all 30 NBA teams play a home game in 30 straight nights. Story here: http://www.nydailynews.com/sports/basketball/hoops-junkie-30-day-nba-arena-journey-hits-final-stop-article-1.1539956
I need to go back into the archives and find one of me at the ballpark.
Q: What memories do you savor most over the first-ever baseball game you attended?
While I can’t definitively say this was the first game I’ve ever attended, one of the earliest games I remember going to was a Yankees-Royals tilt in ‘88 or ‘89 at the old Yankees Stadium with my travel baseball team.
We sat in the cheap bleacher seats while Bo Jackson (K.C.) and Rickey Henderson (N.Y.) were playing left field, and we were yelling for their attention. It was a personal highlight when they turned around and acknowledged us.
The Yankees lost, but it was amazing to get to see one of my childhood heroes, Don Mattingly, play in person for the first time. And you can’t forget hearing Bob Sheppard’s iconic voice announcing his name when he came up to bat. I’ll never forget that.
Q: In your baseball fan career, what experience do you have with in-person or through-the-mail autographs?
A: One of my fondest memories as a kid was getting Lenny Dykstra’s autograph during a scheduled signing session at the local video rental store. Remember those?
I also met Rich “Goose” Gossage and James “Catfish” Hunter at the same baseball card show and got their signatures. Talk about a great pair of baseball nicknames. Unfortunately, I was never successful with yielding through-the-mail autographs, though I definitely purchased a player address book when I was eight or nine in the Kings Plaza Mall (Brooklyn, N.Y.).
Q: As you’ve perfected Hardball Passport, what kind of input or feedback have you gotten from current or former baseball players/staff?
A: Hardball Passport Travelers love to log their old games and get their personal stats: Total number of games attended, ballparks seen, best performances witnessed and teams’ records for games they were at. Also, the box scores are instrumental in enabling fans to relive their own memories of going to the ballpark with their friends or family. That kind of feedback makes me smile.
The iterative requests have also been consistent: Fans want to log Spring Training games, the World Baseball Classic and have even more personal stats: Total ERA when they’re at the ballpark, who’s hit the most home runs or had the most strikeouts. The feedback has been terrific and very helpful.
Q: How can this blog’s readers learn more and stay informed about Hardball Passport?
A: Readers can learn more about Hardball Passport’s benefits and features here: http://hardballpassport.com/aboutus, and can stay informed about updates by following us on Twitter: @hbpassport. But the best way to get addicted to Passport’s nostalgia is to create an account. It takes less than a minute. I hope they love it.”
I do. And I hope that readers take Peter’s cue to look deeper at the history they witness every time they head to the ballpark. It’s not just “my team lost.” There before you are 50 uniformed men living their dreams. Someday, some of them might be delighted to know you witnessed one of the best days of their lives.
That’s Baseball By The Letters! 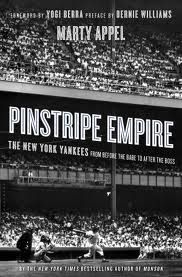 All that’s missing from the great Pinstripe Empire book is more of author Marty Appel. Ever the historian, Marty left himself out of his team history. However, the story of how an eager college kid could become part of a fabled franchise is worth another book. In today’s blog, Marty shares that story:

Q: You got your first Yankees job with a letter to public relations director Bob Fishel. We love good baseball letters. What did you write — and did you write other teams?

A: As I recall, it was just a one-pager explaining that I was editor of my college newspaper, a great baseball fan, had won a Yankees Scorecard contest the year before, and I was seeking a summer doing pretty much doing anything. I didn’t use the word intern. It was the only team I wrote to.

Q: I’ve read that you started in the front office by handling Mickey Mantle’s fan mail?

A: That was true; technically it was fan mail for the team, but Mick’s was 95% of it. This was 1968 – people didn’t realize we had a second “future Hall of Famer” on the roster, so Bobby Cox, our third baseman, got very little. Most of the letters just asked for an autographed baseball, and few included SASEs. The Yankees paid the postage, and most people got printed material back – a signature on a picture of Mick, folded.

Q: Did you collect autographs as a kid? Did you ever send fan mail?

A: I was never an autograph collector, although that first summer I worked there, I did get a few of people I came to know well. Ruben Amaro, Rocky Colavito, Horace Clarke, Ralph Houk, Frank Crosetti…..but I’m still not much of a collector.

Q: During your PR stint, fans and collectors saw you recognize ALL the members of the organization in publications and otherwise. What other fan-friendly measures are you proudest of?

A: I think I did recognize that people like Bob Sheppard and Pete Sheehy were important figures – I put Pete in the team photo, I put Bob in the yearbook. I did some other little things that still exist in baseball over my time in the game. For instance, media guides that show players year-by-year records – I put All Star Games as showing where played, as opposed to saying, “American, American, American, American….” under team. And for post-season series, I put “opponent” rather than “New York, New York, New York, New York,” to make it easier to say, “oh, THAT series.” Some of it has reverted back to old ways, but it was a nice innovation when I did it. One thing I never managed to make standard was my attempt to list “Raised” where it says Place of Birth, and Residence. A lot of guys were born in a city, moved at age 3, and their real hometowns are never shown. If fans knew where guys grew up, went to high school, etc., it would add new interest geographically.

Q: Did you see fan mail and the hobby market change during your work with the Yankees?

A: Fan mail never waned until this current age of electronic mail, and of course, mail being forwarded to “services” offering items for sale. It was always high in the ’70s and ’80s. It would increase as star players came in. Bobby Murcer got a lot of mail when he arrived.

One thing that sort of faded during my time there was “fan clubs.” SPORT Magazine used to list some you could join. I was in the Bobby Richardson Fan Club when I was young. Membership cards, newsletters, exclusive photos. It probably cost $3 a year, although I don’t remember for sure. Those were fun.

Q: Were you ever on a card, even by accident? When collectors find you, do they ask for autographs on things besides your books?

A: Occasionally I would be in the background of a photo as a team spokesman. I’m in a few of the shots at Catfish Hunter’s signing. Recently someone sent me a photo from a Baseball Writers’ Dinner Journal which had a picture of Ron Blomberg, me, and our wives seated at a table. I was happy to sign, but I am always a little bemused by why anyone would want my signature. In a book, I do understand that; I’ve gotten authors to sign books. I’m always happy to sign those; proud, in fact.

Q: For your latest book, how did you work with current and former Yankees?

8. Pinstripe wasn’t meant as an oral history, so I didn’t set out to get long form interviews. If there was an event that I was writing about, and I could find a player involved in that event, call him and get a fresh quote, that would be a mission for the day. But at 620 pages, it was long enough without adding interviews. Finding long buried quotes was good too, like many from people who were on the field for Babe Ruth’s “called shot.” I snuck in a few gems though. Roy White gave me the name of the street gang he was a member of in Compton, California. I said, “street gang? You? What were you, the recording secretary?”

Q: I met Hank Bauer at a Portland card show in the late 1980s. I asked him questions about clubhouse dynamics at a reception. The next day, the show organizer said Bauer was worried I was writing a book! Did you have former Yankees worried about what you knew — and might share?

A: Because I had nice personal relationships with almost everyone I spoke to, and because they DID know I was writing a book, I didn’t have any problems such as you describe with Hank Bauer. But I think you wound up better than the guy in the men’s room at the Copa who encountered Bauer there in ’57.

Q: What’s the next baseball book by Marty Appel?

A: Not ready to announce the next book project yet, hopefully soon

Thank you, Marty. Baseball history is a better place with you in it!