These verbal smackdowns versus Lenny Dykstra give me hope the former pitcher might loosen up this year on FOX Game of the Week.

I don’t think Williams is the first to tee off on Dykstra. I wrote years ago about spending an afternoon with Hall of Famer Johnny Mize at an autograph show.

He was peeved at Dykstra’s behavior toward fans when they headlined the same event.

For those of you who missed it the first time, enjoy Mize at his best here:

Players get box scores. Why not fans, too?

Scorecards. Scorebook magazines. How do you keep track of all the memories of the games you’ve attended?
Peter Robert Casey has a winning game plan in Hardball Passport. He’s developed web applications for baseball and basketball fans to track their game-going adventures.
Peter has one cool past as a sports fan. Peter held community management and strategy roles with Team Epiphany [on the Nike Basketball account], Five-Star Basketball, and the New York Knicks, and spent five years on the brick-and-mortar side of community building at Columbia University’s Teachers College.
In 2009, he became the first media-credentialed microblogger in college basketball history when I received a press pass to cover St. John’s University men’s basketball team exclusively via my personal Twitter account.
I asked him for more details on the inspiration that’s driven him to create such insightful, fun apps. He replied:
“Below are the answers to your great Qs and attached is a copy of a photo of me at the United Center. This past fall, I saw all 30 NBA teams play a home game in 30 straight nights. Story here: http://www.nydailynews.com/sports/basketball/hoops-junkie-30-day-nba-arena-journey-hits-final-stop-article-1.1539956
I need to go back into the archives and find one of me at the ballpark.
Q: What memories do you savor most over the first-ever baseball game you attended?
While I can’t definitively say this was the first game I’ve ever attended, one of the earliest games I remember going to was a Yankees-Royals tilt in ‘88 or ‘89 at the old Yankees Stadium with my travel baseball team.
We sat in the cheap bleacher seats while Bo Jackson (K.C.) and Rickey Henderson (N.Y.) were playing left field, and we were yelling for their attention. It was a personal highlight when they turned around and acknowledged us.
The Yankees lost, but it was amazing to get to see one of my childhood heroes, Don Mattingly, play in person for the first time. And you can’t forget hearing Bob Sheppard’s iconic voice announcing his name when he came up to bat. I’ll never forget that.
Q: In your baseball fan career, what experience do you have with in-person or through-the-mail autographs?
A: One of my fondest memories as a kid was getting Lenny Dykstra’s autograph during a scheduled signing session at the local video rental store. Remember those?
I also met Rich “Goose” Gossage and James “Catfish” Hunter at the same baseball card show and got their signatures. Talk about a great pair of baseball nicknames. Unfortunately, I was never successful with yielding through-the-mail autographs, though I definitely purchased a player address book when I was eight or nine in the Kings Plaza Mall (Brooklyn, N.Y.).
Q: As you’ve perfected Hardball Passport, what kind of input or feedback have you gotten from current or former baseball players/staff?
A: Hardball Passport Travelers love to log their old games and get their personal stats: Total number of games attended, ballparks seen, best performances witnessed and teams’ records for games they were at. Also, the box scores are instrumental in enabling fans to relive their own memories of going to the ballpark with their friends or family. That kind of feedback makes me smile.
The iterative requests have also been consistent: Fans want to log Spring Training games, the World Baseball Classic and have even more personal stats: Total ERA when they’re at the ballpark, who’s hit the most home runs or had the most strikeouts. The feedback has been terrific and very helpful.
Q: How can this blog’s readers learn more and stay informed about Hardball Passport?
A: Readers can learn more about Hardball Passport’s benefits and features here: http://hardballpassport.com/aboutus, and can stay informed about updates by following us on Twitter: @hbpassport. But the best way to get addicted to Passport’s nostalgia is to create an account. It takes less than a minute. I hope they love it.”
I do. And I hope that readers take Peter’s cue to look deeper at the history they witness every time they head to the ballpark. It’s not just “my team lost.” There before you are 50 uniformed men living their dreams. Someday, some of them might be delighted to know you witnessed one of the best days of their lives.
That’s Baseball By The Letters!

Imagine a baseball Hall of Famer sauntering through an airport concourse or hotel lobby. He’s friendly. Not just when someone recognizes him and asks for an autograph.
He greets strangers. Then, he opens his sport coat. From the breast pocket, he produces a Perez-Steele postcard, a Hall of Fame plaque postcard, or a vintage Topps card.

When a child in a wheelchair approached the table, having just an index card, Mize said, “Just a minute.”
He slowly, gently lowered himself (on two new surgically-repaired knees) to be at eye level with the young fan. “I want you to have this.” Out came a 1952 Topps card. The real thing from the real “Big Cat.”

“Sometimes, someone sends me an extra. I share them.”

He said he liked to seek out “special” children or men and women in uniform. “I know what that’s like,” he said of his World War II service.

I nodded slowly for the possible bombshell. It came.

“He showed up in a jogging suit wearing headphones. He wouldn’t talk with the people.

In my day, he couldn’t carry my jockey strap.”

I was saddened that more people didn’t bother to spend a moment with Mize. The show was lightly attended. He would have talked to anyone, not just holders of autograph tickets. I believe collectors thought he’d be at more hobby shows in the future. They had gotten his signature before. He was easy to get by mail. Mize had started asking for a small donation for his local Georgia boy scout troop. (Previously, the boys had to sell Vidalia onions door-to-door to raise money for community projects, he explained.)

Still, he was a bargain. To the end, he could produce a signature that matched his 1952 Topps to the letter. I saw him do it again and again.

Everyone got a small, sincere smile and a noble nod with their autograph.

Tomorrow: the story of Stan Price and his amazing Phillies “custom” collection. 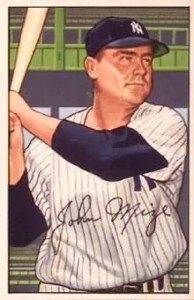 Two nicknames honored Johnny Mize during his too-brief career. Many called him “Big Cat” for his fielding prowess, or “Big Jawn” for his size and Georgia accent.

I’d add “Southern Gentleman” to the list of monikers.

I spent two hours with the World War II veteran at an Iowa card show when I wrote for a collectibles magazine.

Mize felt he owed a debt of gratitude to the public for his Hall of Fame membership. He appeared everywhere in a sport coat and necktie.

“You know anything about that Lenny Dykstra?” he asked. “We just did a card show together.”

I thought we’d be talking about “Nails,” the aggressive old-school player.

“He showed up wearing a jogging suit,” Mize fumed. “With all he makes, he could have afforded a sport coat. He wanted to wear his stereo headphones as he signed. He wasn’t even going to shake hands with fans!” Mize added that he had to stop wearing his Hall of Fame ring, because frequent hand-shaking meant the jewelry kept cutting his finger.

“In my day, someone like that couldn’t even carry my jockey strap!”

At the autograph table, a parent approached with a child in a wheelchair. Although Mize had been through recent knee replacement surgeries, he rose from the table to come nearer the chair. He still moved like a cat, but looked like a bear’s grandfather.

The old Yankee’s smile blossomed. The parent took a picture. Mize looked for a cue, making sure he was done posing.

From his inner sport coat pocket, he produced a 1953 Topps card.

“May I autograph it for you?”

Others in the line didn’t complain. They were overwhelmed at the all-star effort.

I saw Mize had a stack of collectibles in his pocket. I spotted a Perez-Steele card and his vintage 1950s issues.

“Fans send me an extra sometimes. I save them. If I meet a special child, I like to have something to give them. I do the same when I see someone in uniform. You meet lots of military people in airports. I thank them for their service.”

Remember Johnny Mize. If you’re sending a card for an autograph, include a second. State in the letter, “There is a second card for you to keep. Please, share it with another baseball fan if you can.”

Then, put a post-it note atop the extra card – “YOURS TO KEEP.”

I disagree with collectors who’ll send 6-8 cards with a vague “keep some for yourself if you want.” I can’t help but worry this might be a veiled ploy to get a pile of autographed trading stock from someone who didn’t read a letter carefully. That’s not true generosity. Mark each card, so the player isn’t confused.

That child or soldier will never know you made the gift possible. Please, try. You’d make a Hall of Famer smile.