George Mitterwald hasn’t forgotten manager Billy Martin. I asked for any memories of their brief time together in Minnesota. Mitterwald replied:

“Billy Martin was a great manager, whom I learned a lot of baseball from. His strategy and willingness to always push the envelope when it came to making the opposition try to stop us from taking extra bases, stopping us from stealing home, double stealing and taking the extra base almost all the time.

Off the field he was brash at times, generous all the time and just plain fun to be around all the time because of his comedic nature.”

He listened to his manager and did his best. No matter how bizarre the game turned.

Let’s flash back to Aug. 30, 1973 in Detroit. Cleveland’s Gaylord Perry is working on a six-hit shutout.

After the loss, Martin complains to the media that umpires refused to listen to complaints about Perry throwing illegal greaseballs. In retaliation, the fiery skipper claims that he ordered both starter Joe Coleman and reliever Scherman to throw spitters, too.

“Yes it was true and yes I did. I didn’t know how to throw a spitball so I just spit on it and threw it.”

A certain manager was dismissed by team officials three days after flashing such brazen honesty.

Scherman racked up a career-high 20 saves for the 1971 Tigers. As opposed to a win, how much did a save mean 30 years ago? How much did it bring in next season’s contract?

“The ‘save’ got less respect. Our GM did not reward me well for my efforts.”

Scherman rewarded me with his reflections on Sept. 17, 1971. He registered a six-hit win against the mighty Orioles. Did he want to be a starter after such success?

“That was a great day. Starting or relieving didn’t matter, as long as I got to pitch.”

Tomorrow: Eric Soderholm, in the shadow of Minnesota superstars. 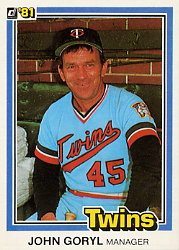 Want proof that Johnny Goryl was a team player? Ask him about hitting four homers in one week (July, 1963), commemorated by http://www.retrosheet.org/. Many players can recite their career stats by heart, including individual highlights.

“I never knew I did that. I know that my best season in the M.L. was with the Twins.”

Speaking of the Twins, Goryl served on the coaching staff of new manager Billy Martin. How was the fiery skipper as a boss?

“Billy M. was great to work for. He did a terrific job that season, taking us to the A.L. Division Playoffs, only to be swept by Baltimore. We lost the first two games by 1 run and then got beat badly in the 3rd game in the best of 5 series.”

Goryl’s closing paragraph impressed me most:

“I am going to enter my 60th year in professional baseball next season, an accomplishment I am very proud of. I have numerous wonderful memories over the years and have seen a lot of great players in that time. I feel privileged to have been able to be a small part of the game and to be on the field with so many great players.


Thanks for remembering me, Tom, 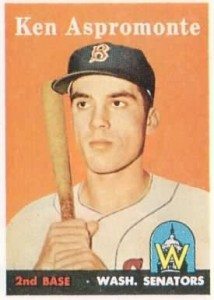