George Mitterwald hasn’t forgotten manager Billy Martin. I asked for any memories of their brief time together in Minnesota. Mitterwald replied:

“Billy Martin was a great manager, whom I learned a lot of baseball from. His strategy and willingness to always push the envelope when it came to making the opposition try to stop us from taking extra bases, stopping us from stealing home, double stealing and taking the extra base almost all the time.

Off the field he was brash at times, generous all the time and just plain fun to be around all the time because of his comedic nature.”

Minnesota Twins pitcher Dave Boswell could have been neither.

I asked him about joining the Twins, as well as his success at bat. He added a couple of startling tidbits concerning what might have been.

First, I asked how owner Calvin Griffith was upon signing his first contract.


Had the same offer from the Yankees.”

I pointed out that the designated hitter rule wasn’t suited for pitchers like Boswell. He had 74 career hits, four of them home runs! He replied:

“I signed as a pitcher and outfielder. Loved to play every day.”

One explanation for Boswell’s mound success, four straight years of double-digit wins (culminating in a 20-win season in 1969) could be Minnesota pitching coach Johnny Sain. How did Sain help?

“John was great at explaining situations to you. All of a sudden, you would find yourself in that position and you knew what to do.”

Twins fans, send your thanks to this might-have-been Yankees outfielder now. My reply ended with…

“Been very ill lately. Sorry it took so long. 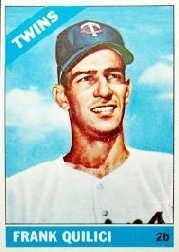 One of the things I love about baseball? You can’t assume anything.

Growing up in the Midwest, it seems like Frank Quilici is a Twins tradition. Whether infielder, manager or long-time color commentator, he’s a big part of team history.

Reading about Frank, the first surprise that popped up was his nickname:

Not being Italian, I puzzled at the accounts of teammates tagging Frank with “Guido.” Was this just a sign of more relaxed, less-politically correct times?
Try listing all ethnic nicknames for current players. Can you think of any?

I asked in a letter, along with a request for memories of Metropolitan Stadium and that 1965 A.L. Championship squad. I received a sparkling reply to my letter:

“Guido is my Dad’s name in italian. he loved baseball and we enjoyed every day that we could play catch and go to the park. Guido means ‘Guy’ in English. I was proud and happy that the guys called me my dad’s name. I was very proud of him and my mom.

Metropolitan Stadium was a big playpen for my four children. As they grew up, they loved being there and loved the people who worked for Calvin Griffith. It was like extended family. Bob Showers has a great book out called The Twins at the Met

“The 1965 team was led by our silent leader, Harmon Killebrew. Our veterans were really class guys and we played day by day, forgetting the last game and looking forward to the next.

“My life in baseball was magic but not without setbacks and fighting for everything I earned. I loved every minute that I wore a Twins uniform. 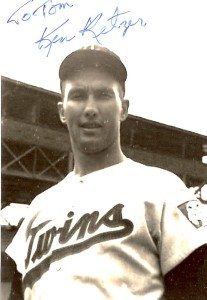