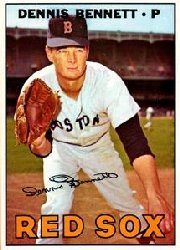 He was a key hurler for the 1964 Phillies, winning 12 games for the team who seemed destined for a pennant until the last weeks of the season.

He summed up his career with great emotion, writing:

“Just being in the Big Leagues was my biggest thrill. Seeing and playing with the greatest players in the world.


My career was cut short by a car wreck. But I made the most out of a bad deal. With today’s technology, I would probably still be pitching.


I was one of the young and coming star(s) of the year.


It’s hard to say where I might have ended my career without getting hurt. They said I had the makings of a superstar. Oh, well. At least I got to play the game I loved for 17 years.


It could of been.

2 thoughts on “Pitcher Dennis Bennett Ponders The Past”