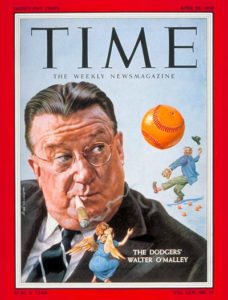 You are not alone.

Baseball by the letters matters to everyone, not just fans and collectors.

Check out the official website of Walter O’Malley, the former Dodgers owner.

Collect those letters. Save them. Read between the lines. You might find a special bit of baseball history tucked away, just for you. 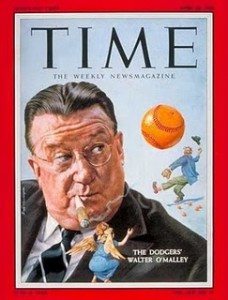 When I found http://www.walteromalley.com/, I hoped the Dodger Hall of Famer’s legacy with collectors wasn’t too good to be true.

“Walter required that any letter received was answered promptly,” he said. “They were a friendly organization.”

“I saw someone wrote to complain about an unruly fan in Ebbets Field,” Brent said. “Walter responded with a letter and two tickets to a future game.”

The website offers other gems of O’Malley fan interaction. Once, a boy wanted the Dodgers boss to know what happened in the parking lot after the game. The site offers O’Malley’s surprising reply to the young fan.

The perfect book showing the little-known side of O’Malley is Forever Blue: The True Story of Walter O’Malley, Baseball’s Most Controversial Owner,and the Dodgers of Brooklyn and Los Angeles

From Brooklyn to Los Angeles, this is a well-researched look at the O’Malley-led team. For the whole story of the Dodgers, this is the book!

Meanwhile, write to your favorite team owner. Who knows? Your letter might be in a book someday!

Walter O’Malley is a mysterious Hall of Famer. Some fans have reviled him for moving the team from Brooklyn. Others assume that he was just a shrewd businessman who stayed in the game for the money.

Take a look at http://www.walteromalley.com/ for another side of the baseball executive.

I found the collection of personal correspondence fascinating. O’Malley seemed giddy that his transplanted team was attracting fans from the world of entertainment. Here is a collection of their letters to the Dodgers owner, along with his replies.

Look close at the 1957 offerings. A boy named Jimmy Hahn sent O’Malley a drawing. The future Hall of Famer took time to thank a fan in writing. He promised the boy one of the first “new” LA caps in his size.

O’Malley died in 1979. There’s a lesson in his correspondence, though. There’s still time to reach the unreachable in baseball. Don’t assume that someone won’t respond, just because they’re running a team. Chances are, they might be as big a fan as you!