Menu
Typical childhood? Imagine watching your dad mobbed by pen-wielding strangers. Consider seeing your dad shuffling more letters and envelopes than 10 secretaries.
Such was life for young Don Garver and his much-adored pitching dad Ned. I’m grateful for Don, who was willing to give the hobby a look back at life with a high-profile parent.
Q: How old were you when your Dad played?
A: I was born in 1944 so I was on the scene for most of his playing days.  I remember very little about his time at St. Louis.  I was 8 years old when he was traded to Detroit and I have a lot of memories of the years in Detroit.  The players and families did a lot of things together on off days during the season and during spring training.  Lots of days at the beach and a lot of good eating.  His years with Kansas City were my favorites.  I was old enough to be batboy each year during spring training.  What an experience!  I never got out to Los Angeles.

Q: It’s obvious that your Dad carefully reads all his letters from fans and collectors. What was his method for handling the mail so well over the years? (After all, he had coaching in baseball, not in being his own secretary! And, on www.sportscollectors.net, I saw that collectors who recorded their attempts tracked Ned Garver at a perfect 415-for-415 in replies!).

A: He read and answered all of his fan mail just as he does today.  He looked at fan mail as his duty to the fans.  He never asked for help and nobody read his fan mail but him. I never heard him complain about having to deal with fan mail.

Q: You knew him as a dad. How did it feel seeing fans clamor for an autograph from Ned, from people who saw him in a very different way?

A: When eating out it was normal to have our table visited by autograph seekers.  We didn’t think anything of it. And I never saw him turn them away.  After the games it was normal to be approached by a large group of autograph seekers as we stepped out of the clubhouse door.  I was always with him in the clubhouse after the games.  I had a uniform in Kansas City and spent most games watching from the bullpen.  When we walked out of the clubhouse I would walk over to the exit gate where my Mother would be waiting.  She never missed a ballgame unless one of us was sick.  There were a few players that walked right through the crowd and never signed anything, but most of them were like Dad.  They signed until they were all gone.  I knew that was the way it was going to be every night.  And I was smart enough not to complain about it.

Q: Your dad’s letter was very humble, replying about his continuing devotion to signing autographs being “It’s always been my policy.” I pointed out that the majority of people writing him today may not have been born when he pitched. Why do you think he’s still so devoted to pleasing fans and collectors, when others from his era might hang up their pens and say ‘I’ve done enough.’?

A:  I believe he will continue to try to please fans and collectors as long as the majority of them are respectful and sincere in their request for autographs.  There are quite a few people who try to take advantage of him by asking for things that are just unreasonable.  Some examples:  Sign a dozen baseballs with stats – no postage, no tip, no thank-you, no please.  Some people want him to write a few pages telling his most memorable events in the big leagues.  That is why he wrote the books.  To tell them about his baseball life.

Players of today don’t sign autographs.  Maybe they don’t get paid enough!  So, fans of today can’t get anything from the players of today but they still like to collect autographs, baseball cards, signed baseballs, etc.  In an attempt to get some autographs they started contacting players of my Dad’s era and found that a lot of them not only gave them what they wanted but provided them with addresses of other old-time players that were glad to help them out.

Q: Based on the recent letters you’ve seen your dad receive for autograph requests, would you have any tips for writing former players in their 80s (besides sending the SASE)?

A: Be respectful, always make the return mail process as easy as possible.  Everything is worth more if it is signed.  So if they sign something for you send them a few bucks to show your appreciation.  Don’t overdo it on the signing.  Asking them to sign 5 baseball cards is enough.  Use your head!  Be kind!

You want to thank Don and Ned for their devotion to the hobby? Order Ned’s new book (autographed, of course) for only $25 postpaid from: 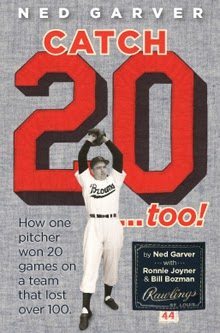 Like Loading...
Make it official: I’m a Nick Diunte fan.
Any article of his is a treat. Nick isn’t the pompous professor of baseball-ology type of journalist. His writing is smart, yet FUN.
That’s why I had to share this note:
“I figured that this article might be of interest to you and your readers. It was inspired by the great TTM return I had earlier this month from Frank Saucier, who after a few months, not only signed by items, but sent along a few articles about his career and his military service. The articles he sent fueled the article that I wrote. He’s the second old timer who has sent me a multiple page reply of articles and photos about his career after I talked a little baseball in the letter.”
http://www.baseballhappenings.net/2012/09/frank-saucier-promising-career-derailed.html

If you want to get a rise out of a former player, go deep.

Getting deep is another story. I’m talking long-balls, dingers…homers!

Martin had two in his career. He wrote:

“Homer off Allen Gettel was a home run right on the line and off the handle of my bat, only about 295 feet.

Homer #2 was really a long one in left center field just ot the left of the bullpen, and I would say close to 400 feet. I forgot the name of the pitcher. Thanks for asking.

Thankfully, http://www.retrosheet.org/ remembers. Good job, guys! Martin connected off Hank Borowy, who won 21 games that year. Both homers were off Yankee hurlers in Yankee Stadium in 1945.

I sent him three questions, along with a sheet to reply. All he signed was…

The records aren’t helping. The Red Sox shipped him to the St. Louis Browns in 1951.

Batts led the American League in errors AND passed balls in 1951.

Offensively, he had more homers and RBI in other seasons. Batts debuted in 1947. Detroit used him as a starter in 1953.

Why 1951? I’d welcome any suggestions, please. To quote my baseball-wise wife:

Think outside the box SCORE!

Batts was a World War II vet. What was going on in his off-the-field life in 1951?