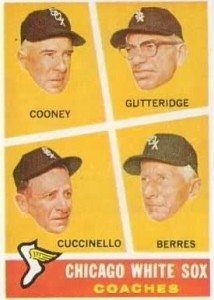 Ronnie Joyner has shared his insights as a baseball artist this week. Today, he tells of his life as an autograph collector. Don’t believe that former players care what you put in your letters? Joyner learned early that every word matters.

“Aside from the many great letters I received, there were some dubious (and funny) moments, too, that I remember off the top of my head:

– Tommy Byrne yelling at me for mentioning his St. Louis “Cardinal” years. He never played with the Cards. I meant to write St. Louis “Browns”. We became Brownie acquaintances years later.

– Gene Conley getting snippy about autograph collectors and why he was “forced” to charge. His note informed that he had three options:

1. Throw the enclosed card in the trash
2. Return it unsigned
3. Request a signing fee.

I never minded the guys that charged, I just didn’t like Conley’s accusatory tone. I always felt my thoughtful, hand-written letters should have separated me from the collectors who were only interested in making a buck off a player’s autograph, but some guys just hated the whole bunch of us no matter what. Nowadays, in my mellow old age, I would have just laughed it off. Being an angry young man at the time, however, I had to fire off a rebuttal while rejecting his offer to sign for, what was certainly, a small amount of money. It was the principle!

I sent my card back and told him he could do “option 1.” I told him that it was my contention that any decent guy wouldn’t have “option 1” as an option. How rotten is it to throw a kid’s card in the trash? Anyway, the problem was that I really wanted a signed 1956 Topps Conley because I was trying to accumulate as many sigs from the’56 set, one of my favorites, as possible. So it doesn’t pay to have principles when you want something.

So principled was I that I re-wrote Conley a letter under the pseudonym “Spanky Bozman” — and enclosed the autograph fee. I used my buddy Bill Bozman’s address, but forgot to tell Bill about my scheme. When the signed card arrived at his house, Bill called me and asked who the heck was Spanky Bozman! I had some ‘splainin’ to do.

But to this day, my Gene Conley ’56 “Spanky” card is one of my favorites. I still suspect that Conley knew the whole deal. I did a bio-illustration of him years later to make amends.

– Al Worthington calling into question my Christianity. “All the autographs in the world won’t help you get into heaven”. He enclosed a pile of literature and signed my card. Still, I resented this challenge to my Christianity. I thought I could be a good Christian AND an autograph collector. So, again, in the stupidity of my youth, instead of laughing it off, I rebutted him in a reply. Nothing overly confrontational, but a rebuttal nonetheless.

Stupid kid. I regret it to this day and I may reach out to him again. Funny thing — when I was helping Don Gutteridge write his memoirs back in 2008, we discussed an interesting story about Worthington. Don was a coach with the White Sox all through the 1960s, and Worthington was a pitcher there for a handful of games in 1960. Don, himself as solid a Christian as you’d ever meet, confirmed that the Sox were stealing signs from opposition catchers via a guy with binoculars hiding in the centerfield scoreboard. Worthington, apparently already solidly entrenched in his Christianity, did not like the dishonesty of the covert operations. He complained to management, refused to go along, and was promptly released. As I said, Don was a good Christian man, but he referred to Worthington as a “holy roller” type, which tells me that Worthington’s approach to sharing his Christianity has apparently rubbed everybody wrong forever. Still, I should contact him about the whole thing. I’m sure it would make for an interesting bio-illustration or straight-up article.

– Russ “The Mad Monk” Meyer getting confused. I wrote a long, thoughtful letter to Nats great Buddy Meyer. Problem was, Buddy was dead. I got my lines crossed and thought Buddy was alive and well because I was attributing the “alive-and-well” Russ Meyer’s address to the “dead-and-gone” Buddy Meyer.

Anyway, Russ writes back saying, “I don’t know who Buddy Meyer is,but I used to be a pro ballplayer.” Then he proceeded to write out all ofhis career achievements as if I had no clue who he was. Pretty dang funny. Iwrote him back and filled him in on the mistake. I did a bio-illustration of Russ years later because he was just too colorful not to draw, but, unfortunately, he died a few years before I got around to it.

(Ronnie is pictured at the 2009 NLCS game in Philadelphia. Photograph courtesy Ronnie Joyner) 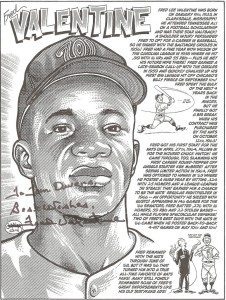