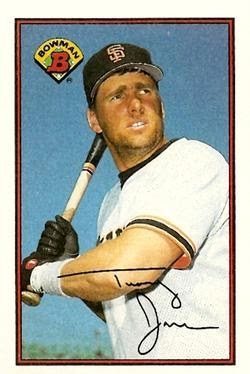 I wrote about Tracy Jones and his autograph signing attitudes back in 2012.

Since then, I’ve reconsidered what a “working” address. Not just a workplace address, but a contact that works. Period.
Players-turned-announcers might feel more motivated to sign in care of their station or network. They may not feel the need for you to pay, since their media employer is. Signing might help listener/viewer ratings.
High profile players may not like volumes of mail at home. Or, their spouse may object. Al Kaline told me at a 1990s card show about keeping fan mail sent to his home in bushel baskets. Then, he sighed and recited a tale of getting his property tax statement mixed up with all the autograph request letters. I translated that, from his tone of voice and scowl, as wanting to say, “I get fan mail and important mail.”
Don’t assume the home address will get you a faster response or more attentive signers. Of course, these jock journalists may not be near their media address for months during the off-season. I haven’t seen lots of evidence of employers forwarding fan mail to homes. Timing is crucial.
Comparing notes on sites like www.sportscollectors.net is vital for hobbyists. Additionally, people change. What works in 2014 might not next season.

I think autograph collectors send their symbolic pink and red hearts to the wrong people.

When you write a current player at home or a retiree, family members are gatekeepers. They support the signers, keeping them signing FOR US.
Therefore, writing to someone and saying, “You can keep an extra card if you want” may not have the desired effect.
These men still believe they have ice water in their veins. Shrug. Shrug. Seen it all.
They may be unphased at your offer.
Instead, in a salute to the family who tolerate fan mail (and I was once told by a weary Al Kaline that his family’s property tax bill got lost in a basket of autograph requests), write, “I’ve enclosed __ extras for you to share with your family or fans.”
Then, put the yellow sticky note on each with the words: “For you to share.”
Some collectors groan, “But it’s okay when all 11 cards come back autographed to me…”
Make a real effort. Truly give. Retirees re-gift extras to other collectors. (Ever get a custom card, thinking it was meant for someone else? Nope. Some generous creative collector shared, and you benefit, too.)
Besides, the suspicious wives, mothers, kids and grandkids may change their tune about those supposedly greedy-selfish autograph collectors.
Happy Valentine’s Day!

To be honest, I groaned when I opened the envelope.

I cherish hand-written replies to my questions. A former Milwaukee Brave (whose reply will be shared in the next week) seemed to use a manual typewriter to send a flawless, hand-crafted reply. Look at his page and you’d time-travel back to the 1950s.

But this one? I saw that “Tom” was hand-written atop a preprinted page. Was this an autograph price list?

Ray Peters, a 1970 Milwaukee Brewers pitcher for two games, condensed his baseball life into a one-page narrative. He added details about his minor league adventures, and a note about he ALMOST appeared on two Topps cards. Peters holds the distinction of being a first-round draft pick for the 1969 Seattle Pilots. Teams had tried to draft the Harvard product four times without signing him.

I marveled at seeing his two major league starts summed up in one sparkling paragraph:

“Though my major league career was a matter of days, I was fortunate to pitch against my batting heroes when I was growing up — Al Kaline was my favorite right-handed batter and Vada Pinson was my favorite left-handed hitter. I walked Kaline and got Pinson (who should be in the Hall of Fame) to fly out, after he singled in his first at bat. LUCK plays a great part in sports. In my two innings, I gave up only singles, four of which were broken-bat bloops. Against Detroit I walked two and one batter got a single; I was taken out and the reliever gave up a grand slam home run and I’m sent back to the minors!!! That’s life.”

By hand, the grateful pitcher wrote with perfect penmanship:

Remember to look for more Ray Peters-like names as you collect in 2011. Look beyond the statistics and awards.  Everyone gets the all-stars. For me, I’d choose prefer the all-star storytellers. 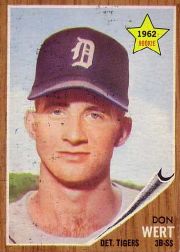 Don Wert took six months to reply. As I faced my own birthday this week, I can’t help but worry about delays. I hope a retiree has been enjoying the summer or wintering somewhere warmer. However, I know that time can catch up to all players.

What did becoming a 1968 All-Star mean to Wert?

How could he keep defensive pace with Robinson and Boyer?

“I was quick to react and got a good jump on the balls.”

Lastly, I had to ask about the feeling of whacking the pennant-clinching hit in 1968. RELIEF seemed to be Wert’s primary emotion. He wrote:

“Glad that Kaline scored the run.”