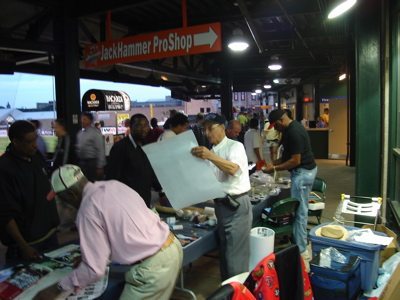 “The Gray Cat” will be on the loose in Chicago soon.

I wrote about Lou Clarizio, one of only six white Negro Leaguers, in a previous blog post.

I learned from http://www.negroleaguelegends.org/ founder Gary Crawford that Lou is set to appear at the Negro League booth at the Chicago Sun-Times Sports Collectibles Convention Saturday, March 17. Admission to the show is $10.

Several Negro League veterans will be on hand throughout the day. The former players sell autographed items.

Gary assures me that while the men are signing for pay, the Negro Leaguers are willing to shake hands, pose for pictures and answer questions. In a sense, the retirees are self-employed dealers. They set their own rules and control their own profit, unlike the sometimes-hectic rush in which both signers and collectors are herded in and out of transactions at a breakneck pace by promoters and security staff.

The opportunities to interact with Negro Leaguers are slim and growing slimmer. If you’re able to attend the show, this might be one of the best time and money investments you could make.

For exact appearance times, costs and other details, e-mail info@NegroLeagueLegends.org.