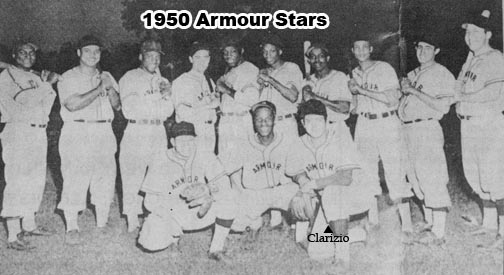 Louis Clarizio Jr. lived a baseball adventure that no fiction could match. In 1950, this Caucasian outfielder played for a Negro League team, the Chicago American Giants.

His humble letter provided a fascinating picture of the power of baseball.

First, I asked about his childhood. Clarizio replied:

“Growing up on the west side in Chicago in Little Italy, I was not exposed to many Black people. In elementary school there was only one. In high school, there were several.”

Fast-forward to an instant baseball career!

“While playing on the team called the Chicago Roamers, I was invited to spring training to Paducah, Kentucky, a Phillies farm club.


My friend called and told me the Amour Stars needed ballplayers. I would play two games and week and one on Sunday. Most of the players were Black. Armour Stars were part of the Industrial League.


I worked at the stockyards in daytime and played ball three times a week.


That’s when I started to noticed that Blacks were not treated fair.”

“We rarely discussed race. When we did, it went something like this:


‘We love playing baseball. Things are the way they are.’


While with the Armour Stars, I was one of the leading batters in the Industrial League, and I was noticed by the Chicago American Giants.


Jackie Robinson was signed in 1947 by the Dodgers. The racists were angry. They complained no whites in Negro Leagues. That’s when I was signing up.”

Clarizio included a photocopy of a 2009 article about his experiences. In the feature, he explained that teammates asked, ‘Can this gray cat play baseball?’ They didn’t say ‘white.’ In those days, everyone was a cat.”

While Comiskey Park was Clarizio’s home ballpark (when the White Sox were traveling), the rest of the American Giants’ schedule was unpredictable.

“When we played, every small town had a baseball team. The American Pastime. The Major League sponsored them. That was, and still is, their farm clubs.


A typical day started at 11 a.m. We boarded the bus and traveled to these small towns to play.


The first thing we did when we got to the ballparks was eat HOT DOGS.


I can’t tell you how many.


Some towns didn’t even have one Black person living there.


We would fill the little stadiums. Most people were good.”

By ‘people,’ I assumed Clarizio meant fans. He added:

“The bad racists threw their beer bottles at me, firecrackers.


When I’d get to the dugout we would all have a big laugh.


‘Double Duty’ (manager Ted Radcliffe) would say, ‘Are you starting World War III?’ He would ask me if I wanted to move to center field or right.”

I’m grateful to this “Gray Cat” for sharing this epic chapter in diamond history. Clarizio’s autograph is available for purchase through http://www.negroleaguelegends.org/. The non-profit website helps organize signings to support these history makers. I see it as money well spent.

(Thanks to Kyle Smego at Autograph Addict for suggesting I seek out this barrier breaker.)

Coming Monday: Another side to the Steve Sax mystery?