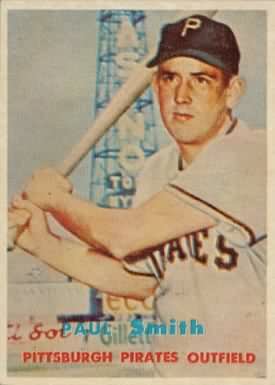 Call me a mind reader.

Just as a formality, I asked Paul Smith which of his seven homers was a favorite. I knew, however. Sure enough, Smith agreed, saying:

Cheers to http://www.retrosheet.org/ for the details!

Smith played ball in Havana, before there was any Fidel Castro. What was it like?

“I had played winter ball in Cuba 1952-53 and had a great season. The fans were great when I played for the AAA team.”

I read that Smith had suffered concussions as a player. A hitch in the armed forces may have complicated his career, too.

“Concussions – hard hat (helmet) made it minor! Headaches for a couple of days.

Military – a year in Iceland.”

Before thanking me for the questions, Smith summed up:

“Life in baseball is great. See a lot of the country. It’s a challenge when you’re only 5-foot-8.”