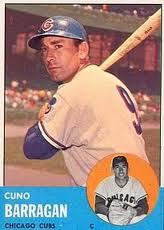 If you want to know what might have been in baseball, don’t depend on the sportswriters. Ask a teammate.

I asked Cuno Barragan, a Cubs catcher from 1961-63, what his impressions of Ken Hubbs were. He responded:

“Ken Hubbs was signed as a shortstop, but with Ernie Banks, they moved him to second baseball. With his youth and range, he was outstanding!”

“I hit a fastball off left-hander Dick LeMay (Giants). It just made it into left center field bleacher. I thought it was a double. Then I saw the umpire signal home run! Glen Hobbie (pitcher) was the next hitter.”

Don’t think that Barragan is a “rose-colored glasses” alum for the Cubbies. What did he think of the team’s managing while he was up?

“College of Coaches was the worst thing that ever happened. Baseball is managed by an individual who in his estimation plays the best nine players he thinks he can win games with.

College of Coaches failed! [Yes, Mister B did the underlining himself…]”