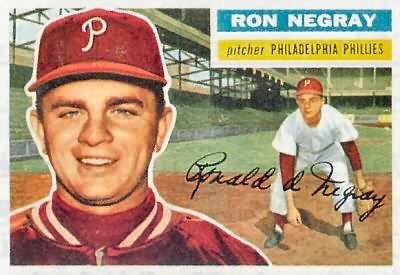 Although the bulk of his career came as a Phillie, pitcher Ron Negray began and ended in Dodger blue.

That meant having Roy Campanella as a batterymate in 1952. Negray’s assessment of Campy?

“He had a great arm and personality.”

On April 5, 1957, Negray was traded back to the Dodgers. His reaction upon learning that the team was headed to Los Angeles isn’t what you might guess.

“I thought it was a good move for the Dodgers, financially.”

Most importantly, Negray spelled out how it feels to be featured on a baseball card, especially when someone wants that card autographed.

“I still feel the same today as before. It’s always nice to be thought of.”

As a bonus, Negray added a letter recounting his life in sports — on an off the diamond.Most importantly, Negray spelled out how it feels to be featured on a baseball card, especially when someone wants that card autographed.


I played in the majors only a few years and spent most of my time in class AAA. Pacific Coast League, International League and American Association.


I had a great fourteen years playing pro ball and made many friends.


I was an athletic goods salesman for 34 years, traveling Ohio and Michigan.


I sold most of all the colleges and pro teams in my area. I also sold my products to sporting goods dealers. I sold uniforms, helmets, shoulder pads, training supplies, tape, etc.

Tomorrow: Will Chris James take 16-20 years to sign for you?