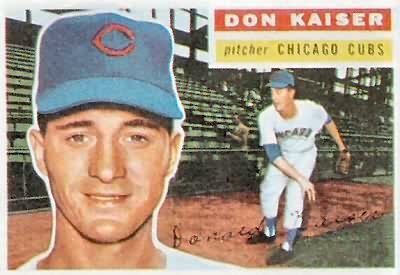 A lad from Oklahoma had a job to do. He didn’t care who had won last year’s World Series.

“I guess the biggest thrill in my first start was after the game, knowing I pitched a two-hitter against the World Champions.”

(Thanks to http://www.retrosheet.org/, here’s the results of that amazing day, produced in front of an amazed Wrigley Field crowd.)

Less than one month later, a home crowd saw Kaiser shut out the Milwaukee Braves.

“That day in Wrigley Field was one of those days when everything went right. I mean, I had good stuff and good control and they weren’t hitting that day.”

Before adding his thanks, Kaiser summed up his career:

“Well, I can tell you that life in the Majors is the Best. I just wished I could have stayed up there a lot longer than I did.

I still follow the game pretty close, even though I have been out of the game since 1962. But I can always say that I got to play with and against some of the greatest players in the game.

After I got out of the game I got into law enforcement and spent 30 years in it. Thanks for asking all these questions. I hope I have helped you some.