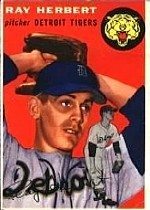 He offered. I accepted.

Ray Herbert jotted just a few lines on his reply. However, he added his telephone number, saying, “Call if you want.”

I’m delighted I did.

I felt like Ray’s catcher. I asked for details about one of countless important dates in his career. He did the rest.

Herbert: “It was the 9th inning. Jim Landis our leadoff hitter handed me a bat. They’d do things like that to give pitchers a break. I said to Jim, ‘It’s September. A new rookie. He doesn’t know me. He doesn’t know if I’m a hitter. He’s going to throw me a fastball down the middle, and I’m going to hit it onto the roof.’

Herbert remains bemused by his 38-inning scoreless streak in 1963. “I didn’t really think about it. Every game is a new game. You just want to go out and win.”

I wanted to know about his baseball cards. “Topps never sent us any. We’d never see one, unless something gave us one to sign at the ballpark. I think we got about $125 for appearing on a card.”

“There really wasn’t any. There wasn’t TV like today, so fans didn’t know that much about us. If they wanted an autograph, they’d come to the ballpark.”

“I read it all and sign for everyone,” Herbert said. “It is an honor to be asked for an autograph.”