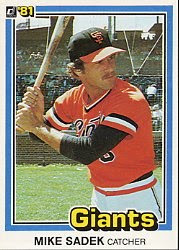 Mike Sadek may have been as rare as an Elvis sighting in San Francisco box scores from 1973-81. However, his memories would put him on my list of all-star Giant storytellers.

First, I wanted to know if this Minnesota native was immune to cold-and-windy Candlestick Park. I’m still shivering over memories of my one blustery trip there. How did he feel?

“Cold and windy, but better than the minor leagues!”

The back-up catcher got a bonus in his 1973 rookie season. He became batterymate for future Hall of Famer Juan Marichal.

“Yes, it was a thrill to catch him. He didn’t have his best stuff, but he had great control.”

I expected Sadek to tell what kind of pitch he clouted for his first major league home run on June 19, 1977, versus Grant Jackson. (Thanks for the history, www.retrosheet.org) Maybe, he’d remember the final score. Instead, I received a classic tale.

“It took a few years for me to hit one and after I circled the bases and got to the dugout — there was one of my idols (since I was in junior high school) Willie McCovey — laying flat on the bench. Two guys were fanning him with towels.


He lifted his head and said, ‘I thought I saw Sheik (me) hit a home run!’

The biggest thrills for me was just getting there after six-plus years in the minor leagues — introducing my dad around (my biggest fan — my first-hit ball and my first career HR ball are buried with him.”