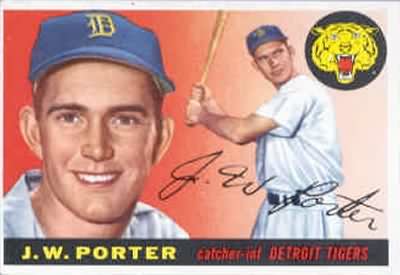 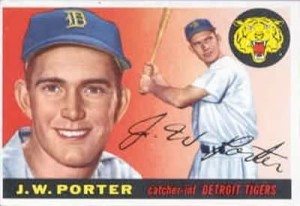 J.W. Porter appreciated every game. Active from 1952-59, he converted to catching to prolong his career. In the 1950s, he played six different positions while collecting some keen baseball insights.

“Tiger Stadium was the perfect stadium. Fair to both pitcher and hitter. What made it perfect, however, was that it was perfect for the fan. Not a bad seat in the place and you felt you could reach out and touch the players.”

In 1958, one of Porter’s Cleveland teammates was a young Roger Maris.

“Roger was a great teammate on and off the field. He had a fine rookie year and should never have been traded. It was surprising to everyone what he did in 1961. I guess it was a case of a player finding the perfect park for his particular swing.

“He would probably hit 90 homers in new Yankee Stadium.”

“One of my homers was an extra-inning pinch-hit off Billy O’Dell. That was my only walk-off homer. The one I’ll remember the most, however, was against Don Larsen, the first game he pitched the next year following his perfect game.”

Porter is one of the dwindling group of St. Louis Browns survivors. Most of all, he seems one of baseball’s most grateful alums.

“Thanks for asking,” he signed.