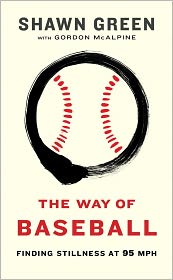 Shawn Green’s new book,  The Way of Baseball: Finding Stillness At 95 MPH (Simon and Schuster, 208 pages, $24) is not your typical baseball memoir.

Can you judge a book by its cover? Green’s cover doesn’t feature a photo of him with the Blue Jays, Dodgers, Diamondbacks or Mets. Instead, he chose a Zen symbol turned into a baseball.

The modest slugger has NO photos in his biography. Nonetheless, he produces one of the most fascinating baseball titles since Ted Williams wrote The Science of Hitting.

By the way, Williams plays a role in Green’s book. Green shares the Q & A transcript of a dream in which The Splendid Splinter asks Green questions.

Green tells how meditation and yoga helped him focus on his baseball skills. His attitude adjustment was profound. In 1997, he warmed up in the Seattle outfield by playing catch with kids in the stands. As a Dodger, he began a ritual of throwing his batting gloves into the stands after a home run. Why? He writes that shedding the gloves helped quell his ego after a dinger.

Green sparkles when writing about the feelings of being a major leaguer. He explains well his unhappiness after three years in Toronto. He was happy when he got hits. No hits meant depression. “My batting average those first years was not bad, about .285. Nonetheless, that meant I was happy only about 28.5 percent of the time and thus sad the other 71.5 percent.”

You’ll want to pick up a bat, too, after reading Green’s explanations of hitting. He reveals how Greg Maddux and Randy Johnson tipped pitchers, insights he found through focused calm at the plate.

I wanted to review Green in hopes of finding why a former player becomes a reclusive autograph signer. In his book, he notes that he was a conscientious autograph signer (in person) but didn’t enjoy the in-person encounters. The crucial evidence came on page 176, as Green told of becoming a Diamondback:

“Arriving each morning by eight at the facility, I’d wave to the security guard at the players’ parking lot and to the smattering of fans along the fence with their binders of cards and Sharppies. I always signed for the new kids, but just waved to the adult regulars, the ones we saw day after day and year after year. It didnt bother me if they sold my autographs on eBay, but I didn’t feel the same obligation to stop for them. They were always around: at the hotels, waiting by the players’ parking lots, hanging over the dugout. Some players found them annoying. But I saw them differently. They loved baseball, even if they were profiting from our autographs. They promoted us and the game.”

Green’s fine book sets a new standard for what post-career biographies can offer. Without stuffing his book with statistics, photos and tabloid tales of teammates, he’s honest about his life in uniform. Unfortunately, this enlightened star still totes the common assumption that most autograph collectors are eBay vultures. Don’t expect to get this author’s signature on anything but his book in the near future.

Sorry, not his book. (I will read it!) Just the book jacket set me thinking.

His bio blurb says that he retired to spend more time with his wife and family.

Why do collectors overlook baseball relatives? Why do they ignore someone, just because they never wore a uniform?

In his trio of great baseball books, Seth Swirsky proved what swell content awaits creative collectors. He gleaned some wondrous insights from widows of long-gone players.

It seems the Hall of Fame should forward mail to wives of living and deceased members.

Andrew Martin, at his ever-surprising Baseball Historian blog, has gotten great stories out of Mrs. Curt Schilling and the nephew of Joe Pepitone.

I asked Andrew how he’d approach a baseball relative. Here’s his kind reply:

“Off the top of my head I have interviewed 4 baseball relatives in the past few weeks… Mrs. Schilling, Billy Pepitone, Ben Gamel (brother of Mat), and George Case III, son of the outfielder. These subjects have not been intentional, but rather opportunity that beckoned.

I don’t have a preference of the relationship between that person and the player, but think in each case there is the potential for valuable insight. Typically, what we know of a player is what they allow us to know, or what the media portrays. Speaking with a relative gives us some insider knowledge. That being said, I am still working on developing the best questions to ask such interview subjects.

When I interview the relatives of players, I try to make the interview center on them, and not the player. First of all, I think it is the respectful thing to do. Secondly, I think that the relative has a unique story to tell on their own, and through that, we typically find out more about the player.

For the All-Star type players, I want to know more about them off the field. The media has typically given us more than enough material about on-the-field exploits, so I want to know what is happening for them in other areas.”

Coming Tuesday: A look back with Yankee pitcher Rich Beck.

Shawn Green’s initials might be RTS (Return to Sender).

Green has done some appearances to promote his new book, The Way of Baseball, including Jewish Community Day at Dodger Stadium. I assume that means signing copies.

I’ve only seen reviews (mostly kind) about the book. In it, Green is supposed to explain how he retired at age 34 to spend more time with his wife and kids.

Is that why he remains an elusive by-mail autograph signer?
Although this might be good only temporarily, collectors might reach him in care of his publisher Simon and Schuster. I haven’t tried it. No guarantees. However, maybe S&S would encourage him to sign again? I wouldn’t risk any valuable card. Or, someone who writes to him at his home address might try addressing it to “Author Shawn Green.”

Green and his family might be more worried about slighting readers, as opposed to mere fans or ordinary collectors.