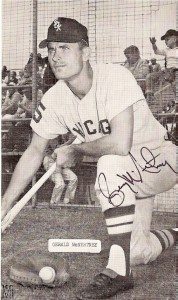 Catcher Jerry McNertney found that his most productive season in a nine-year career came with the 1969 Seattle Pilots. Looking back, those career highs at bat weren’t the only things he missed about the Pacific Northwest. McNertney wrote:

McNertney relocated to Milwaukee, serving as opening-day catcher for the Brewers. He returned there in 2010 to relive those uncertain first days with the Brew Crew in a special ceremony.

“That ejection in Detroit: I can’t remember the ump. But I remember the hitter and pitcher, Norm Cash and John Gelnar. We had him K’d, but the ump disagreed!”

The ever-fascinating www.retrosheet.org uncovered McNertney’s clash with authority. Cash was awarded a walk. Subsequently, umpire Larry Napp provided McNertney a long walk back to the dugout, ejecting the normally-stoic backstop.

One of McNertney’s greatest accomplishments in baseball came in never forgetting his Iowa roots. His hometown honored him in 2009 with Jerry McNertney Day.