Fred Valentine is a stellar signer. A sparkling 95 percent, says the trusty www.sportscollectors.net.

Here’s some swell memories he shared back in 2010. Enjoy! 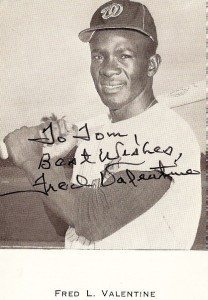 I wanted to share another response from my rookie year of blogging. Fred is now 85. I’m sure his humility remains healthy. If the autograph hobby ever has a Hall of Fame, I’d put Mr. V in it.