Menu
From fan to friend.
That’s the amazing tale of Andy Strasberg and Roger Maris. Yes, this is evidence of what a sincere fan letter can accomplish.
The one question I wanted to ask Andy was about Roger Maris, autograph signer. He replied…
“Tom,
We never discussed his fan mail or his philosophy regarding autograph requests.
In the early 1980s, while I was working for the Padres my boss, Elten Schiller asked me if I could get Roger to autograph a few first day covers for his collection. I asked Rog and he said absolutely which made me look like a hero to Elten.
Here’s a few other Maris autograph stories:
Soon after Roger passed away, I received in the mail a baseball that an artist had painted Roger’s image on and it had Roger’s autograph. The ball was sent as a friendly gesture from long time collector Barry Halper who knew of my admiration for Maris.
And a couple of years after Roger passed away, I received a surprise package from Roger’s wife, Pat who had enclosed a few autographed items for my collection and thought that I would enjoy them.
And finally, while I was working as a consultant on the HBO movie 61*, Barry Pepper, who played Maris in the movie, remarked that he was trying to get an autograph photo of Roger and one day while we were taking a break in between shots on the set of the Yankee Clubhouse I surprised him and gave him an autograph photo of Maris hitting #61. Barry was speechless and tears welled up in his eyes as he thanked and hugged me.
Andy”
I can’t say enough about Andy’s new book Baseball Fantography. Get two: one to savor, and one to share. It’s a perfect present for a fellow fan.
Coming Wednesday: Kiss blank index cards goodbye! 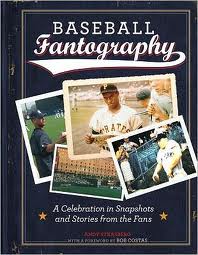 We are not alone!

Did you whip out your pocket camera (or cel phone) to try to capture a single image from your last trip to the ball game? It’s been happening for years.

Baseball Fantography: A Celebration in Snapshots and Stories from the Fans (Abrams Image, $19.95)  proves it. Author Andy Strasberg began www.Fantography.com, sharing informal pictures from his days as a baseball fan, then executive.

He’s shared what others have shared with him in book form. Pictures of long-gone ballparks. Snaps of superstars being human — signing autographs, relaxing at spring training — not posing from the professional photographers.

The fans have provided a sentence or three in context, captioning their fascinating flashes of baseball history. Of course, notable photo contributors can be found, such as Hall of Famer Ozzie Smith.

I was dazzled by the comments from baseball photographer Doug McWilliams. You’ll love the look of Strasberg photographing McWilliams photographing players for Topps in the 1970s. McWilliams traces his beginnings back to attending PCL games to make his own “photo cards.” He’d return with photographs of players, getting autographs on his creations. Sound familiar?

My only quibble about the book is its size. The book measures approximately 7-by-9. I wanted the typeface larger and the photos bigger. I’d love a coffee-table edition of this. Scrapbook sized!

Most of all, I want more photos. I’m sure I’m not alone. A second volume has to come soon. Andy Strasberg has a winning idea. Make some space on your bookshelves.