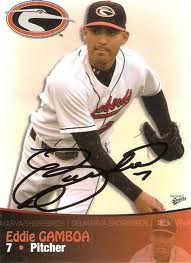 Collector Rich Hanson may baffle some of you.

Some might think he gives more than he gets. He stays busy summers by photographing minor leaguers, then sending 2 prints, one for them with the request for the other one to be autographed and returned in the SASE. Yes, some keep both and never reply.

What about making a double-sided 8-by-10 laminated collage of someone’s highlights, saving clippings, box scores and other details? Such hustle can bring awesome results. Look at what the effort brought this enterprising hobbyist. Rich recapped:

“Eddie Gamboa signed the double-sided 8×10 that I put together about him and the no-hitter that he pitched.  Not only that, but he wrote a note on a large piece of white cardboard thanking me for writing to him and saying that now I have the card from the no-hitter.  Not certain what he meant, I opened up the cardboard that he had folded and wrote on the back of, and discovered that he had sent me his team’s line-up card from the day of the no-hitter that he had pitched.  Wow!  If I had done something like that(pithcing a no-hitter in AA ball), I’d hang on to that for the rest of my life.

“For him to send it to a fan as a “thank you” for writing to him, is really quite a gesture. I have written him a thank you note, offering it back to him if he reconsiders and wants to save it for his family, but the gesture was really something.  Very generous and totally unsought.  If he does not reconsider, it will certainly have a hallowed place in my collection.  Remember when you read about cheats like A-Rod and Ryan Braun, that there are guys like Eddie Gamboa out there too, guys who care about more than just themselves.”

Thank you for the sterling example, Mr. Hanson! Sure, you can count the misses. Except, when you connect like Rich does, who cares about the occasional out?