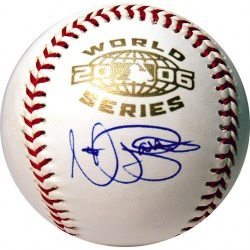 At last, I have the first response from my letters to veterans who played AAA ball this year. Check out the list of 10 I
sought out from this July post. I had forgotten how some players will save their fan mail until season’s end.

I asked him about his Detroit days, getting to have an exclusive audience with legendary broadcaster Ernie Harwell. Robertson replied:

“Ernie would share with every detail any story you asked about, but the most interesting story to me was the one about how he had a hand in getting Baseball Chapel started for the players and staff in the game.”

From his years in the game, I wanted Robertson’s take on who helped him most. One name surfaced:

“Jeff Jones is my favorite pitching coach. He’s done a very good job communicating on a professional and personal level.”

Lastly, Robertson made me question just how fictional the movie Bull Durham is! The mound conference scenes are high points in the movie.

Therefore, I asked this hurler what are the best or worst things catchers have said to him on the mound during a game. Robertson’s reply?

He closed his letter not with his autograph, but his favorite Bible verse: Matthew 22:37