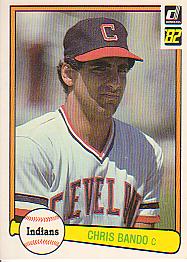 Faith and humility. They served catcher Chris Bando through the 1980s as a major leaguer.

I asked for memories of his older brother Sal Bando. Chris Bando replied:

“I was never 1/2 the player my brother was. I only had vision in one eye which paralyzed me at times, but no one knew this.”

Bando blossomed in 1984, posting career highs for the Indians. How?

“Tom, I received a chance to play every day, which allowed me to not worry, knowing I’d be in there the next game if I didn’t hit.”

“Tom Seaver was on his way out and he threw high ’80s and FB was straight. He threw a lot of FB and I was a FB hitter.”

The San Diego Christian College website offers a detailed biography of Chris Bando and a look at the coach today.