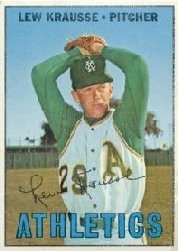 Same name.
Both pitchers.
Both Athletics.

The second Lew Krausse enjoyed a longer career than Dad. I asked if Lew’s father (who died in 1988) ever got to attend.

“Yes, he was at my first game and many more.”

Krausse bypassed an invitation to brag, when I asked for details on any of his six home runs.

“I think the first was the most memorable.”

With thanks to http://www.retrosheet.org/, I see that Krausse is referring to a blast off White Sox pitcher Jim O’Toole July 22, 1967.

Milwaukee fans remember Krausse as the team’s 1970 Opening Day pitcher. The Brewers had him back in 2010 for a 40th anniversary celebration. Memories of 1970?

“It was difficult being on an expansion team.”

I didn’t ask about his greatest achievement as a player, but Lew added this career reflection:

“It was a great experience. I met my wife on a flight.”