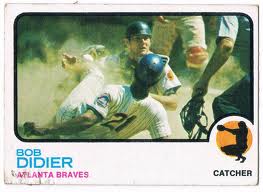 As a Little Leaguer, I couldn’t have caught a knuckleball with a butterfly net.

That’s why I marvel at Bob Didier. He was named to the Topps All-Rookie team in 1969. That year, the Braves catcher broke in catcher two future Hall of Famers, knuckleballers Phil Niekro and Hoyt Wilhelm.

I wrote, asking Didier to describe those fluttering deliveries. He responded with a gem of a letter:

I waited until the ball stopped roll and I picked them up.”

Didier’s 1973 Topps card is classic. The action shot is supreme. The 1972 Mets roster says #21 was Cleon Jones. Any details about the card?

He taught me to respect the game.

My dad has (written) a book about his life in baseball, Podnuh, Let Me Tell You A Story — A Baseball Life.”

Didier shared a few tales with a Cape Cod League reporter in 2008. Read (and listen) here!