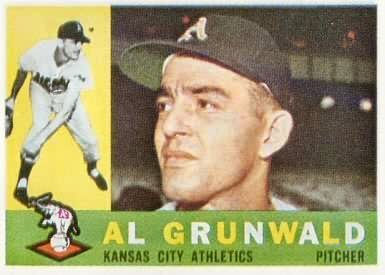 First, anyone spotting his nickname should be clued in that this was no ordinary pitcher. Grunwald was one of baseball’s good sports. Imagine being in an organization seven years, suddenly being told that you might be of more service at another position.

That’s how a first baseman gets relocated.

Upon reading that, I expected Marlon Brando’s “I Coulda Been a Contendah!” Nope. No moaning about finding work in Japan as a first baseman after the majors gave up on the converted hurler.

He debuted with the 1955 Pirates. Grunwald recalled one talented young teammate:

“What I recall about Roberto Clemente, he was the greatest ballplayer I ever saw! I never talked to Roberto, but watching him play was remarkable!!!”

A 1955 highlight had to be his 5.1 scoreless innings against St. Louis May 1. Grunwald shared:

“Tom, there is always tense moments in baseball. Pitching against Stan Musial was a great thrill! He hit a line drive single over my head.”

Grunwald’s only career save came as a Kansas City Athletic. He shut down the Boston Red Sox in Fenway Park on Sept. 11, 1959. How did that feel?

“Looking at the left field wall, it felt like you could reach out and touch it. Ha! Ha!”

Grunwald opened and closed his letter thanking me. He wished my family ‘Happy New Year’ and prefaced his autograph with “As Ever.”

I hope more former players like Al Grunwald remain “as ever.” That would make a new year happier for all fans and collectors.