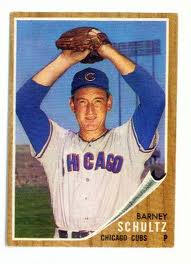 I asked Barney Schultz about his brief stardom as a 1960s reliever. The aged rookie found his overdue ticket to the bigs in the form of the knuckleball.

I never got to see him pitch. I remember him as the tiny head on the Cardinals Coaches cards in the 1970s. No, I didn’t ask him about Mickey Mantle’s homer in the 1964 World Series. I wanted to know about his best-day knuckler. Did it resemble Hoyt Wilhelm’s? Schultz replied:

“Basically the difference in knuckleballs is about the same. Some sink and flutter. Some flutter more (good movement). It is sometimes called a ‘dancing pitch.’ Some pitchers throw it softer than others.

I threw mine as hard as I could for a knuckler. Some pitchers wanted to learn the pitch but the grip of the ball has to be practiced first.

A good grip can only be learned over time. It is a difficult pitch to learn. Take a ball and grip it with your 2nd and 3rd knuckles and imagine throwing it to a batter and being able to control.

I bent my knuckles and used tips of my fingers to sort of dig into the ball and popped my wrist as you do with a fastball.”

Tomorrow: Schultz recalls his best manager ever, along with a six-strikeout day versus the Braves!