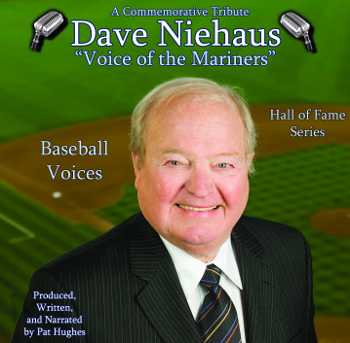 The M’s loved the guy. For years, the PR office would send you cards of players and THE VOICE.

From 1988-93, I lived near Seattle. I chatted with autograph hounds outside the Kingdome after a Friday night game. Still-grinning Niehaus (you could hear that same smile on the air!) headed toward the player parking lot.

While some players, in football-like fashion, put their heads down and charged, Niehaus strolled. He looked left and right. I never saw anyone ask for an autograph. He had signed for everyone earlier in the season, or in years past. He nodded and waved each time a fan bellowed his name.

Some of the collectors guessed they’d have forever to get a signature.

The TTM crowd may have felt the same. On the always-enlightening http://www.sportscollectors.net/, I checked to see how many collectors wrote for a signature and logged in their effort. Hundreds?

As Dave himself said so often: My oh my!

Larry Stone, the gifted Seattle Times baseball writer, traveled with Niehaus when he accepted his 2008 Hall of Fame Frick broadcasting award. Stone captured the pride and passion Niehaus shared on the air, even coaxing a comment about autographs in this unforgettable feature.

As someone who sat through more than one so-so M’s game, I agree with Levine’s assessment. The game you heard from Niehaus wasn’t always the one you saw. His was always better.