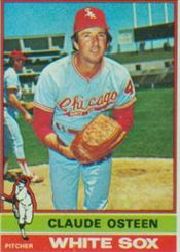 When he moved to the American League in 1975, he could put his feet up. No more hitting worries. That’s what the designated hitter did.

Osteen didn’t see it that way! He wrote:

“I loved hitting, thought of myself as a good hitter. I took pride in it and worked on hitting a lot.

Check out his lifetime batting stats. More than 200 career hits. The walks he drew. The sacrifice bunts. The White Sox never gave him even one chance at the plate. If manager Chuck Tanner had known! I think today’s managers would keep Claude busy as a pinch-hitter.