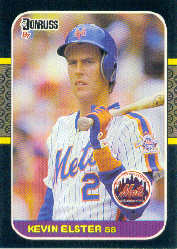 I ask questions. Sometimes, I get answers. Other times, just clues.

I wrote to infielder Kevin Elster to ask about his autograph rule. Each signature is $1, plus a SASE. Want your three cards signed? Better include $3.

Why so reasonable? Is the money going to a charity? Is the fee to discourage “collectors” from taking advantage of a kind signer? Has the “buck a sig” rule changed the quantity or quality of fan mail? Or, do collectors not even bother with letters, just sending their money to “purchase” autographs?

I wrote a praiseworthy, polite letter. I noted that $1 was quite fair. I think some retirees have penalty fees, hoping their high prices will discourage people from writing. Or, after watching ANTIQUES ROADSHOW, they believe every signature will turn to gold (no matter how unknown they were in their brief time in baseball).

The bad news about Kevin Elster? Not a question got answered. The good news? I received three autographed cards, a gesture I appreciate. I could have received my letter back unsigned, or no envelope at all.

I won’t annoy the Elster family again with a follow-up. Instead, I’ll just theorize on the kind response, which could have meant:

1. If we send the blogger an autographed card, he’ll tell others to send in a dollar for a signature.
2. What letter asking about autograph policy? I just saw the SASE, and grabbed some signed cards for the guy.
3. The poor fan didn’t have a card or a dollar, so he made up a story about a blog in hopes of getting a reply.

In the days ahead, I’ll keep asking questions to retirees about how they view autographs and collectors. Signatures are as much a part of the game’s history as any stat.