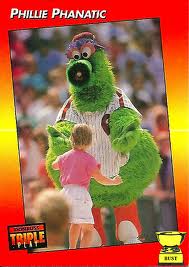 Regardless of whether you love it or hate it, David Raymond has authored baseball history.

From 1978-1993, Raymond performed as the first Phillie Phanatic. These days, he’s the visionary behind Raymond Entertainment Group. Does your team’s mascot need a makeover? How about more character depth and backstory? What about spinoff characters?

I asked Raymond to look back at his years on the diamond. His responses:

1. My favorite players over the years were Willie Stargell, Tug McGraw, Tony Pena and, of course, Tommy Lasorda!

2. I was very, very lucky over my 25 years of performing. My worst injury was a tiwsted ankle and knee when Lonnie Smith tackled me when he played for the Cardinals.

3. The Mascot Hall of Fame was one of our greatest decisions at Raymond Entertainment. We have received over 10 million media impressions over the years and countless numbers of fans now recognize that mascots are skilled performers, not just ‘kids in suits.’!

Here’s the official bio of the Phanatic from the Phillies. See what the Mascot Hall of Fame offers as the Phanatic’s tribute. Discover who jokingly called Raymond a “green transvestite!”