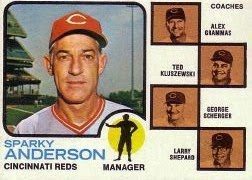 George Scherger may not read Wikipedia. That’s why I shared a glowing quote about him:

He was my first manager I ever had in 1953 when I broke into the Dodgers organization. I begged him to come with me. I used to say, ‘George, what does that sign say over there?’ He’d say, ‘Manager.’ I said, ‘Funny thing it’s on my door. I got the title, and you’re the skipper.’

Caught in the glow of the spotlight, Scherger turned the focus back to his Hall of Fame boss, writing:

“No way, I couldn’t tie his shoes. I never told him anything. In fact, I learned from him. when I left the club, I won a pennant at Nashville (1979) and Indianapolis (1982). That’s because I listen to Sparky.

When I had Sparky at Santa Barbara, Calif., he was a good player and wanted to win. He had great baseball instincts. He loved the game. He got his nickname in double A ball in Texas.”

If you write to Scherger, be sure to thank him for his World War II service. As July 4 approaches, it’s a great time to remember all the men who wore BOTH uniforms.