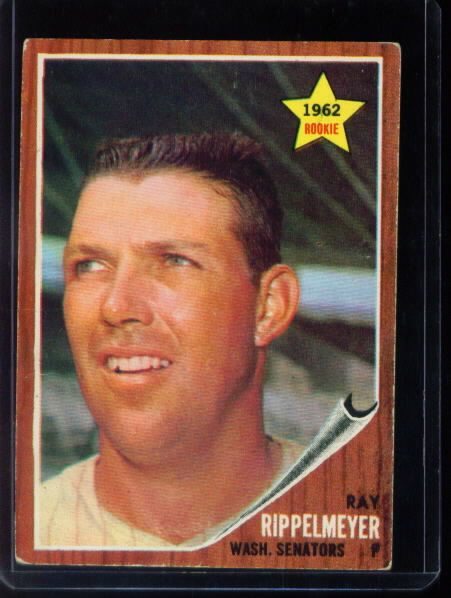 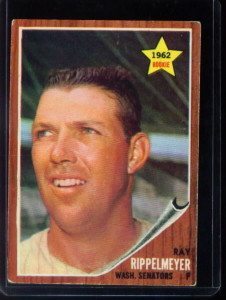 Nearly 50 years later, what would you remember most: the great day at the lake, or “the one that got away”?

Yes, first-ever games can yield fun memories. I pored over box scores and found a more intriguing game to investigate: May 3, 1962, at D.C. Stadium versus the Boston Red Sox. Here’s Rippelmeyer’s recap:

“That day in early May was one I’ll never forget. It was an afternoon game and I didn’t even think I would pitch as I had warmed up seven times the night before and never got in the game. My arm was weary. In the second inning, Claude Osteen got into trouble and I was called in the game with the bases loaded and two outs to face the “Yaz.” I got him on a ground ball to short to keep the score at 3-0 Boston.

I hit my home run my first at bat and then held them scoreless until I batted again and hit a line drive to left field off of Mombo’s (Bill Monbouquette)curveball.

I couldn’t believe George Case gave me the steal sign. I took off and Jim King hit a line drive over my head into right center and I went to third and Case is waving me home. I ended up scoring on a IBH to right with a big slide at the plate.

I shouldn’t have even been hitting as I was dead tired and I got in trouble the next inning. With two outs and the bases loaded, Eddie Bressoud, shortstop, hit a ball off the end of the bat between first and second that hardly made the outfield grass. Two runs scored and I was so angry I overthrew the next couple pitches to get Pete Runnels out, but had hurt my arm and I wasn’t the same the rest of the year.

I feel very fortunate to have had the chance to play in the major league. Even if it was only a short time. I had a good playing career and won over 100 games in AA and AAA ball in a period of 10 years. I stayed in the game and coached for a long time. I just finally retired after the 2007 season for good. I spent the last 14 years with the Mets.

For a farm boy that went to a small high school of 125 in Valmeyer, Illinois and never played in any organized games until I got into high school, I got farther than I even had hoped. I’m 77 now and I still relive my games in the majors and many big day I had in the minors.”

Thanks to SportsCardDatabase for the card image. Every collector should know about this invaluable resource.