Whether he’s “Detroit Dizzle,” “Urf” or Brian (his Clark Kent-like alter ego), I’ve got another name for him:

Hobby Rookie of the Year

I don’t think I’ve raved enough about the greatness of http://www.sportscollectors.net/. Give them $14.99, and they’ll give you the world of autographs for a year.

As I’ve checked the successes posted by other collectors, one post-er stood out. Someone is having TONS of fun with autographs.

Who is this joyous newcomer? I wrote him. The laid-off steel worker who’s gone back to school to finish his degree responded:

My best friend and I used to collect cards as kids. Around 7th grade, I stopped collecting but my buddy continued. Recently, he told me about collecting autographs ttm and when I took a trip to visit him and his wife over the summer, he showed me this site. I joined in early October and have been addicted ever since. I busted out all of my old cards that I haven’t looked at for over 15 years and began sending out requests.

I simply send off to players I remember as a kid but I also try to send out to any Detroit athletes. My first goal was to get a card signed by a Piston, Red Wing, Tiger, Lion, Spartan, Wolverine, Shock player and a golfer born in Michigan. I am close to finishing that project and I will be moving on to the 68 Tigers team. acquiring every 86 Met is another project I am undertaking, but it is one that will obviously take a good bit of time and money.

Most of my success notes are just me being dumb. The rest of the stuff I write is simply to entertain myself. Instead of saying– “player x didn’t answer my questions,” I will say “urf will have to wait until player x’s truth serum kicks in.” I just try to make the comments informative, yet ridiculous.

I admit that I was never sent an autographed sushi recipe and I never received the wrong answers to my ?s. since a lot of people receive the wrong cards, I thought it would be funny if I claimed that I got the wrong answers to my questions. I understand that I run the risk of confusing people so I try to make sure the important information is clear before I leave some dumb comment.

I have a lot of fun participating in this hobby. It is a great way for me to return to a childlike state of mind that isn’t worried about the war, unemployment, the economy, etc. Believe the hype. Detroit is a mess. The people here are hardworking, generous people who love their sporting teams but the decline of the auto industry is killing us. Most people are involved with the auto industry, whether it be outside suppliers, dealerships, or the big 3’s factory workers/employees.

This hobby helps me to loose the negative vibes and have some fun.”

I wish “Urf” a Happy Hobby New Year. He reminds us that collecting isn’t about price guides and complete sets, but having fun while remembering baseball OUR WAY.

(Quick! Forward to friends, relatives and anyone who’ll take pity on a hobbyist in December)

1. www.SportsCollectors.net. Invest in a collector. For $14.99 a year, here are daily updates on the world of autographs. It’s the chance to share what you’ve learned and benefit from the wisdom of the best hobbyists out there. A great community.

2. www.SportsAddressLists.com. Harvey Meiselman charges $35 for the ultimate baseball address list. He finds the unfindable, sharing ways to reach everyone in baseball’s past and present. This is a valuable tool no collector should be without.

3. Postage stamps: Ask your mail carrier for a “stamps by mail” order form. Get the stamps sent to the collector you want to treat. We don’t need a lottery ticket for a $1. For two “Forever” stamps, we get more excitement and better odds. By the way, “Forever” stamps are best. The self-addressed, stamped envelope might not get returned before the next postal increase. That autograph return could be kept in postal detention for the sake of an extra few cents owed.

4. Office supply gift card: Collectors have endless appetites for envelopes, computer printer ink and paper. Keep us well fed, and we’ll be happy through the winter.

5. Time: This one is the easiest and hardest. Ask, “What’s new with your collection” Then, truly listen. Your collector loves baseball and the hobby. Getting to tell someone why both are special is a joy. That might be the best gift of all. 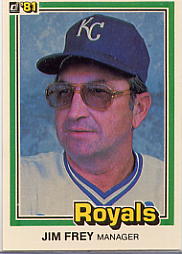 I’ve had the image in my head for more than 30 years.

I’m outside Metropolitan Stadium, ready for the Orioles to arrive. Sharpie in hand, I’m ready for autographs.

A few, like Jim Palmer, come alone by cab. Well-dressed guys heading into The Met.

Then, I see a car pull up near the visitors entrance. A convertible. The passenger is wearing an Orioles uniform. It’s coach Jim Frey.

True story. Unfortunately, I know only the story’s beginning.

I see on http://www.sportscollectors.net/ that Frey’s signed 138 of 145 fan mail requests. I’m not wanting autographed cards. I just want to know where the O’s coach went in uniform. Think he’ll tell? It’s worth a two-stamp gamble.